We hoped in vain to see some manatees before we left. There’s a small park on the lagoon side of Cape Canaveral where the manatees sometimes sun themselves, but none was there the two days we visited. On Thursday we walked along the beach and had a last lunch at a beachside restaurant with Grandma, Grandpa, and Aunt Mary before flying back to Denver. We spent Friday unpacking, doing laundry, and packing again – this time for a cold-weather vacation. We’re going to Breckenridge, Colorado on Saturday for a week in a condo.
On an unrelated note, I’m nearly 2/3 finished with The Sixth Extinction: An Unnatural History by Elizabeth Kolbert. Jon Stewart interviewed Kolbert on The Daily Show a few weeks ago, and I bought the e-book. It’s well-written, informative, fascinating, and the most devastating book I’ve ever read. Unless there’s a surprise/”Just kidding!” ending, it looks like humanity will not survive this century. I’m not sure what to do with this information. Maybe I can have that part of my brain scrubbed like Jim Carrey and Kate Winslet in Eternal Sunshine of the Spotless Mind.

I forgot to include this with the NASA pictures. 🙂

Another Kennedy Space Center photo:
Relieving oneself in space is apparently quite a production, involving a camera, video monitor, and careful planning (also being strapped on to the toilet). 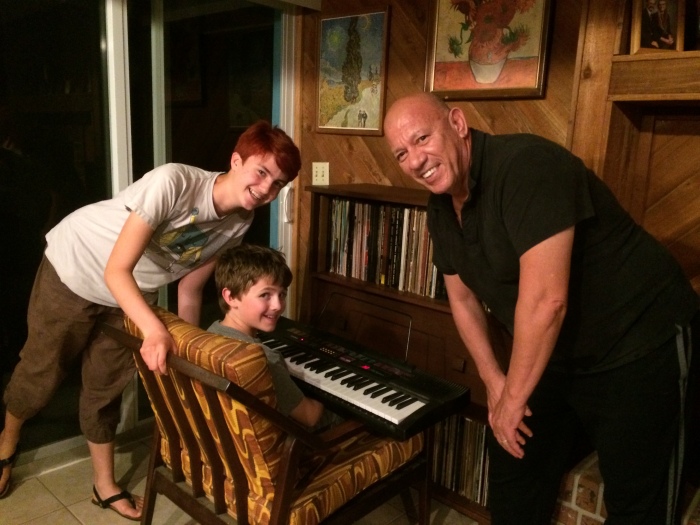 Saying goodbye to Uncle Roldan the night before we left

The white ones are royal terns. Not sure about the black ones.