I’m so glad I listened to my inner John Denver and came home after 20 months of wandering.

It’s hard to believe we’ve only been home two months.  So much has happened, and we’re so happy to live in this beautiful Denver neighborhood.  Our friend Patti picked us up at the Denver airport the night of April 1.  She and our friend Suzanne had come to our condo that afternoon and uncovered and arranged the furniture, mopped the construction/remodeling dust from the floor, bought us groceries and left those and Easter goodies and other supplies in our new home.  The first couple weeks seemed to be constant busyness – buying a variety of housewares, unloading the storage locker (mostly photo albums and framed photos) in Colorado Springs, buying a bike for Charlie at a local shop where the young saleswoman gave me her cell number and told me that she and her special-ed teacher boyfriend would come to our home on their days off and teach Charlie to ride a bike, completing change of address info at the post office, and taking care of a variety of administrative details.  There never seemed to be enough time in each day at first.  I did join a singles Meetup group though and attended a couple get-togethers including one at an Irish pub on April 18.  There I met John, and we’ve been dating ever since.  Yesterday he spent an hour running back and forth along a trail at City Park near our house teaching Charlie to ride a bike.  I never did call Anna from the bike shop, but I was so touched by her offer.  Charlie made significant progress yesterday and was riding about seven seconds at a time on his own just before we headed home.

In April Laurel and I walked to the high school she’ll attend in the fall.  I had completed the registration paperwork and thought that would be the extent of our responsibility.  Oh how naive I was.  Since Laurel was homeschooled for ninth grade, she essentially has to repeat ninth grade for public school.  The school requires 240 credits to graduate which must be earned either there or at another accredited institution.  Since I’m not accredited, Laurel has to take extra courses in the next three years and volunteer at some strange-sounding mountain activity in order to graduate on time in 2018.  It still sounds like her graduation is not guaranteed; I’m concerned about whether they’ll give her credit two years in a row for the mountain program, and yet, that’s the only way she can earn enough credits.  She also has to take four courses through Brigham Young University’s online, high-school courses (That’s the school’s requirement for kids who need to earn more credits.  It has to be through BYU – seriously.) this summer, but that’s as many online credits as the high school will allow.  Meanwhile, Laurel would like to have some spendin’ cash and has applied online and in-person at a number of groceries, fast food restaurants, and a movie theater.  She’s had two interviews, but neither manager has called her back.  A fifteen-year-old (which Laurel will be tomorrow) seems to have more legal work restrictions than someone older, so that seems to be a significant strike against her.  She’ll stay busy this summer though; her online courses take a lot of time, and cross-country practice starts next week.  She got a head start on the cross-country training on Memorial Day when we ran the Bolder Boulder (10k) for the third time – each of us attaining our best times yet.  John drove us there and took pictures of us at the finish line (although the photos on here are ones from my phone). 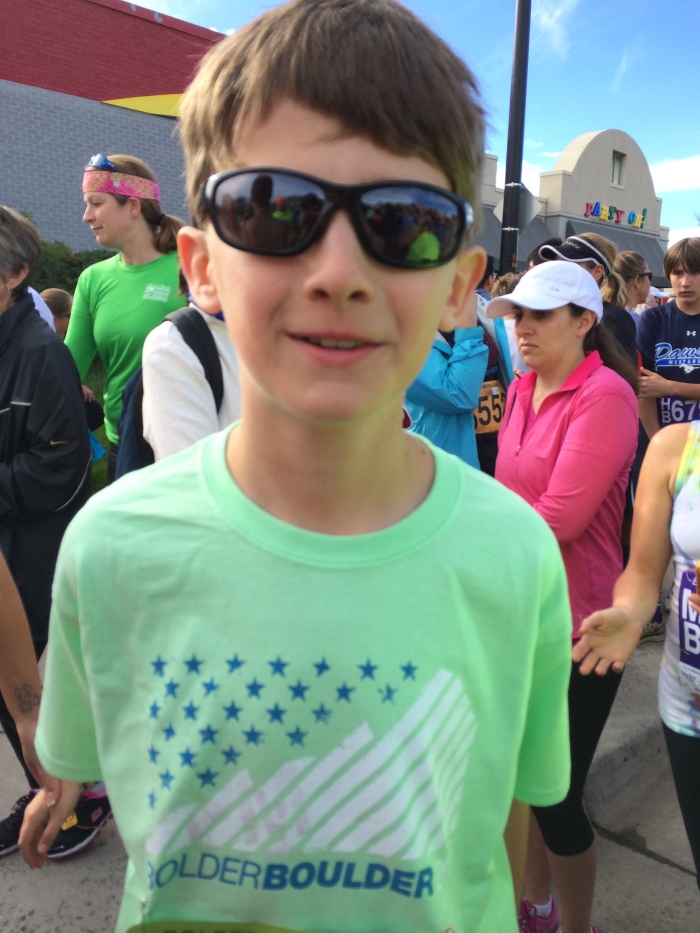 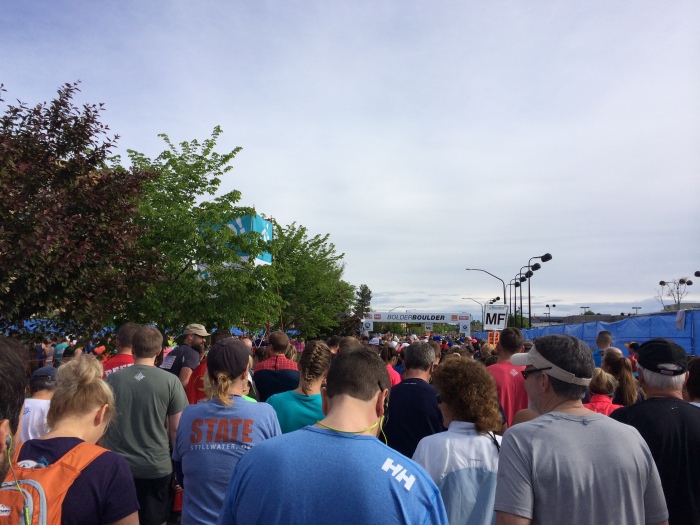 A few weeks ago the kids and I flew to Orlando where Wayne’s sister Lynn and her husband Mark picked us up at the airport and drove us to Cocoa Beach where we visited Wayne’s parents and sisters for a week.  While there, we went on two boat rides on the Banana River (a lagoon), walked along the beach, visited parks on the Atlantic Ocean, and made a return trip to Kennedy Space Center where we attended an astronaut talk. 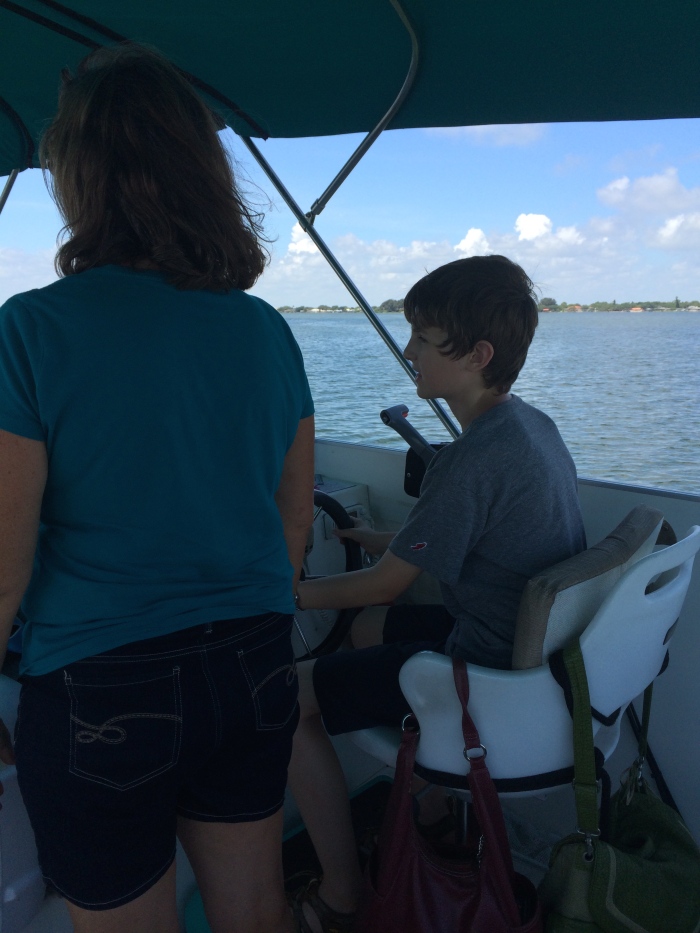 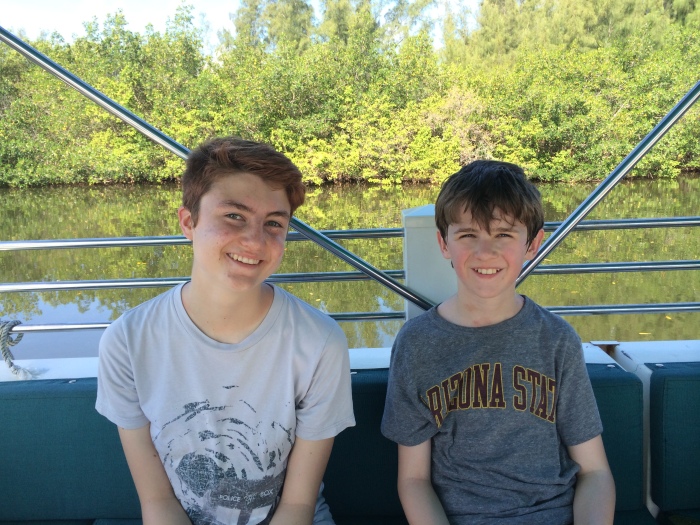 Sweet Lord, it was hot and humid. I took this photo after our two-mile walk to the boat ride.

The kids and I attended a Rockies game in early April which we left in the fourth inning; it was cold, raining, scantly attended, and the Rockies were already losing by a large margin.

We’ve joined a community organization that has both social events as well as volunteer opportunities. The kids, John, and I (and other group members) picked up trash for about 90 minutes along the busy (and trashed) street where the center is. John and I also recently volunteered with other group members at Project CURE’s warehouse where they receive and box medical supplies to send to developing countries. It’s staffed almost exclusively by volunteers and is quite an operation (but I didn’t take any photos there). 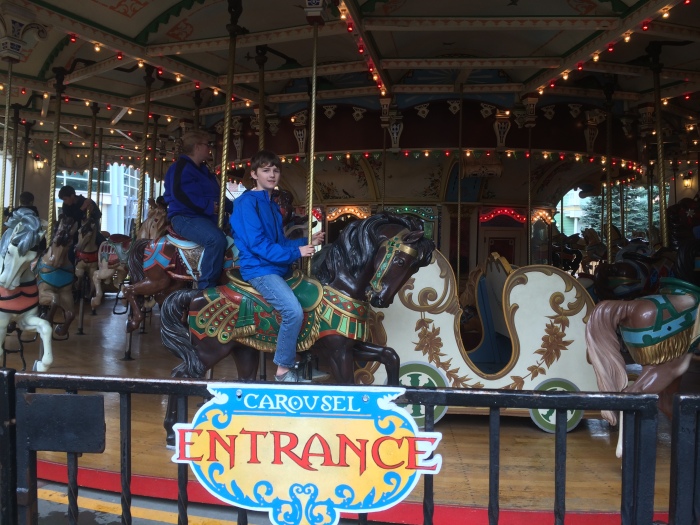 I bought discount tickets for Elitch Gardens (amusement park) through a homeschool organization. Of course, homeschool day ended up being cold and rainy, but that meant short lines for the rides (after the storm passed)! 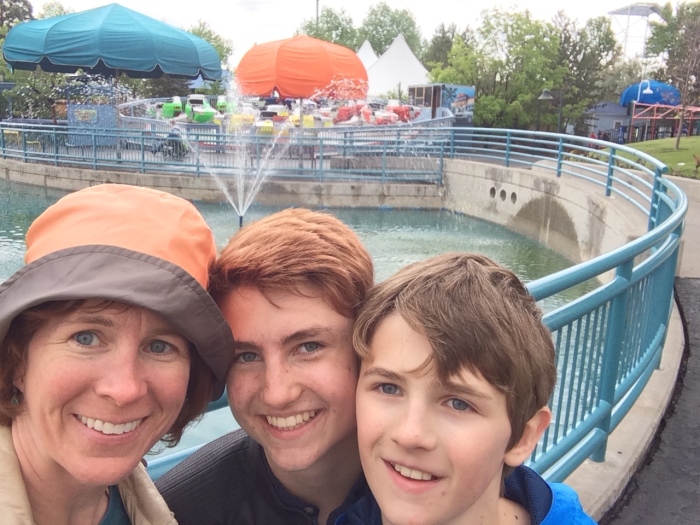