When Steven Colbert and his guests sang that song on his last show in December, Laurel said it was so sweet she felt like crying.  Then she heard it playing in Cardiff Castle when she toured it in Feburary.  The castle acted as a bomb shelter during WWII when “We’ll Meet Again” was a popular, British song.

The kids are taking a walk, and I’m supposed to be packing; but, shockingly, I don’t feel like it.  It’s been raining off and on for the past couple days.  With the exception of Toronto (and Niagara Falls) where the thunder was unlike anything I’ve ever heard, I don’t think we’ve experienced thunderstorms since we left the US. The places we’ve visited have a mostly gentle rain.  I just remembered there were thunderstorms in Kapadokya, Turkey, too.  In Paris and here in Dublin where I’ve had to dry the clothes on a drying rack, it takes days for them to dry because of the moisture in the air.  I was thinking about how I’m going to age 10 years stepping out of the airport in Denver and how we won’t be able to leave the house without a bottle of water or go more than a couple hours without moisturizing our hands.  I’ll miss greenness and moisture.  I’ll also miss the safety of the places we’ve visited.  The US has far more violent crime and automobile accident deaths than any country we’ve visited.  I’ll miss the ease of getting around.  The cities where we’ve stayed, Toronto being another exception, are pretty compact and have good mass transit.  In Denver we’ll be within walking distance of some places, but many destinations require multiple buses.  I will be joyful to see mountains and friends again though.  I will be grateful, as I have been while traveling, for our ability to homeschool.  In some of our visited countries, homeschooling is illegal.  Some people don’t even know what I’m talking about. We all got our hair cut a couple weeks ago by Lydia, a pretty, young, Romanian woman at a salon owned by a young, Chinese man.  Lydia asked Charlie how he goes to school while we’re traveling, and he tried to explain homeschooling.  “You don’t have schools in Colorado?” Lydia asked.  We explained that we do, but the kids have never gone.  This made no sense to her, and she strongly encouraged the kids to go to school.  Usually people say, “Oh, online school, huh?  We don’t have that here.”  I explain that it’s not online school, that the kids are just learning as we travel.  Then they’re really puzzled.

We’re hoping to make it to Temple Bar this afternoon or evening to listen to their Irish music.  Other than that, I guess I have all the photos I’m going to have of our travels.  So here are a few of Dublin that I haven’t posted elsewhere.

Trinity College:
Dublin does not have inspiring architecture. The focal point of Trinity College seems to be a smallish grassy field between two libraries – one historic whose bookcases are roped off and the other an ugly, modern, concrete building that only students can use. I had never seen a library with turnstiles before; students use their IDs for entrance through the turnstiles. The sign about staying off the grass made me sad. Even sadder was that all the students we saw were abiding by that. What’s the purpose of the grassy field?

A pretty, stained-glass window inside a library funded, in part, by a grant from Andrew Carnegie’s foundation 100 years ago. I didn’t realize there were Carnegie libraries in other countries but read that they’re all over the world. 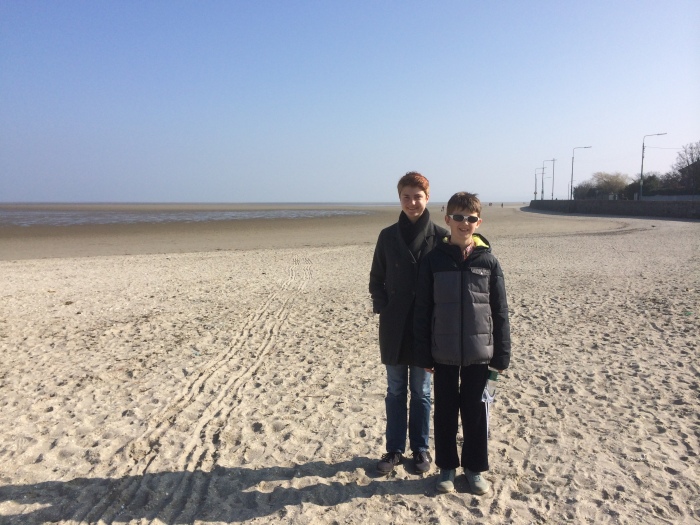 Irishtown: a Dublin neighborhood east of our apartment on the Irish Sea. We thought we’d walk out to the water, but the tide was out so far that we never did get there.