We took a 2-hour and 20-minute train ride from Dublin to Galway Tuesday morning.  After checking in early to our hotel, we walked a mile and a half up a city hill lined with gas stations and industrial-looking buildings to a restaurant.  After we ate a filling lunch, we walked out to the parking lot where we waited for James and Ciara from a local horse stables.  They drove us back to the stables and then proceeded to spend an hour having us help them in letting the horses out of their stables to run around, groom the horses, and then put on their tack.  After all that, we only rode for a half hour along a “country lane” which, despite James’ bucolic framing when he walked next to us and took our pictures, was next to another road and lots of apartment buildings with rusty satellite dishes.  Tripadvisor gave the place excellent reviews, but the reviewers did a more adventurous route that went through the city streets and then on to the beach.  I didn’t think any of us was willing or able to take our horses on city streets, so we did the “family” adventure.

Wednesday we took a 50-minute bus ride to a ferry to Inishmore, the largest of the Aran Islands.  The weather was cold, rainy, and windy; so we decided against walking or biking the island as we had previously planned.  (The local bike shops rent tandem bikes which I thought might work for Charlie and me.) We took a minibus but could barely see the sites through the fogged-up windows.  We stopped down the hill from an ancient fortress near local souvenir shops where I bought a beautiful Irish sweater from the friendly, older woman who made it and then a Celtic female warrior t-shirt from a woman whose son does the shirts’ artwork.  After a yummy lunch at the cafe, we hurried up the hill to the 3200-year-old fort.  It was very windy but beautiful and fun.  Unfortunately we had to hurry back to the bus.  Hurry, hurry, hurry at each site.  The driver didn’t even want us to get out at most places.  He returned us to the harbor at 2:30 even though the ferry didn’t leave until 5:00.  Most of the businesses were closed so we had to figure out how to kill 2.5 hours in the pouring rain and gusty winds.  We stopped in at the tourist office, and the woman working there confirmed there was indeed nothing to do and that most of the restaurants are closed.  We went to “The Bar” (American – with lots of American memorabilia and photos) and ate snacks, bought some groceries for Thursday’s hike at Spar grocery, and got back on the ferry.  Katerina, an American college student from Wisconsin who’s going to school in Manchester, talked to us after we got off the ferry and were waiting on the bus.  She seemed impressed that we were able to ride in a minibus.  She said she and a family from Minnesota rode in a car “with some weird guy” who also returned them to the harbor hours early.  She said she spent most of her waiting time at the grocery.  “Not what I expected to do on the Aran Islands,” she said. 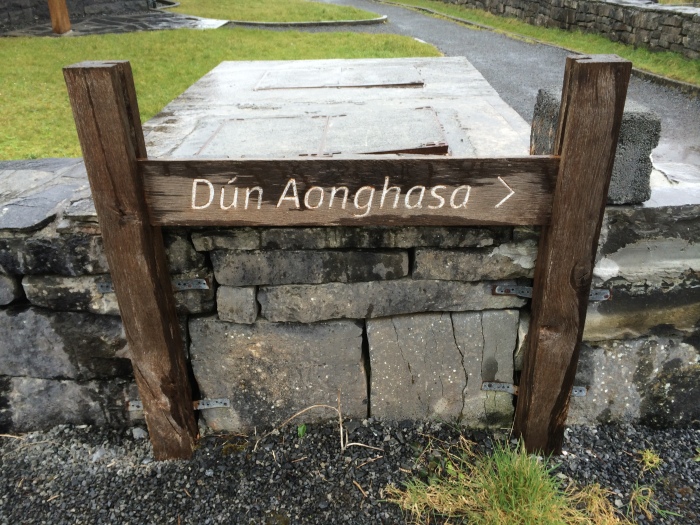 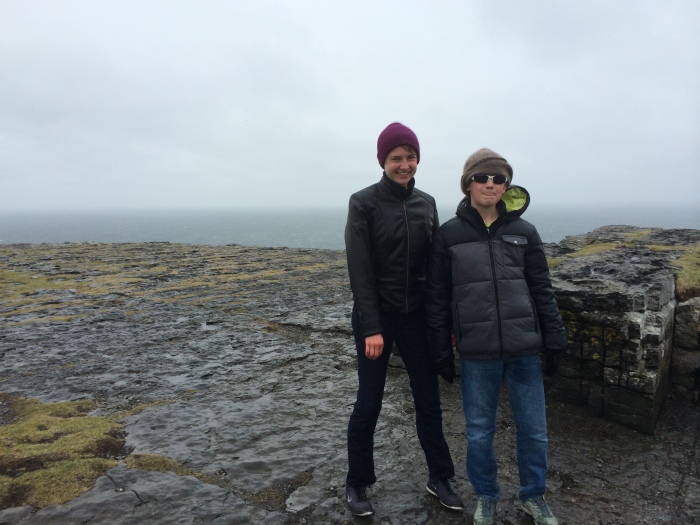 Really windy! I was afraid the kids were going to be blown into the sea and wouldn’t let them stand any closer than this to the edge. 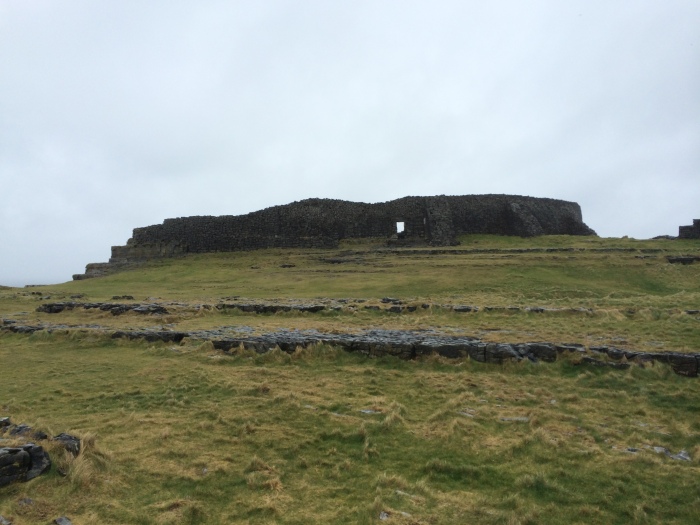 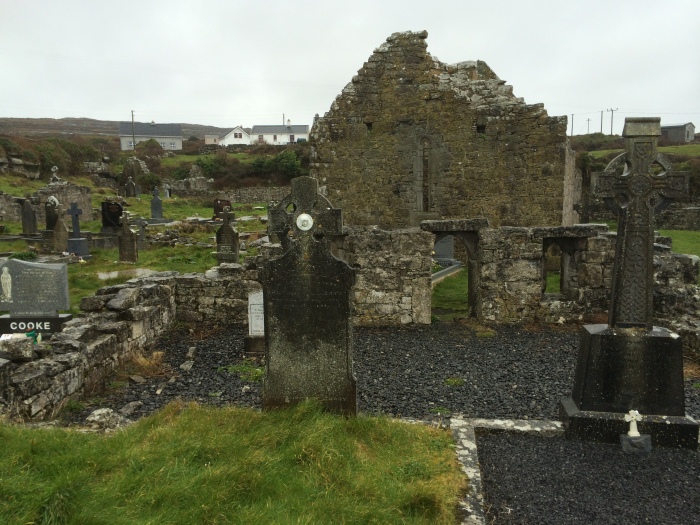 A cemetery on Inishmore – the ancient-looking tombs are from the 20th century (but the building/ruin is much older).

Thursday we rode the bus to the Cliffs of Moher.  It was very windy but partly sunny, so at least we didn’t get rained on.  We didn’t have to worry about choosing whether to take the scary trail since we lost it.  At first we followed the signs to Doolin, but then the signs stopped and we found ourselves in a muddy, open expanse.  We turned around and took the road to Doolin which was still pretty but scary in its own way – no sidewalk or shoulder, narrow lanes, blind curves, and traffic that doesn’t slow for pedestrians.  Luckily we were eventually able to get on a still-narrow-but-hardly-used road.  In Doolin we and several other Americans (college-age) got on the bus back to Galway. 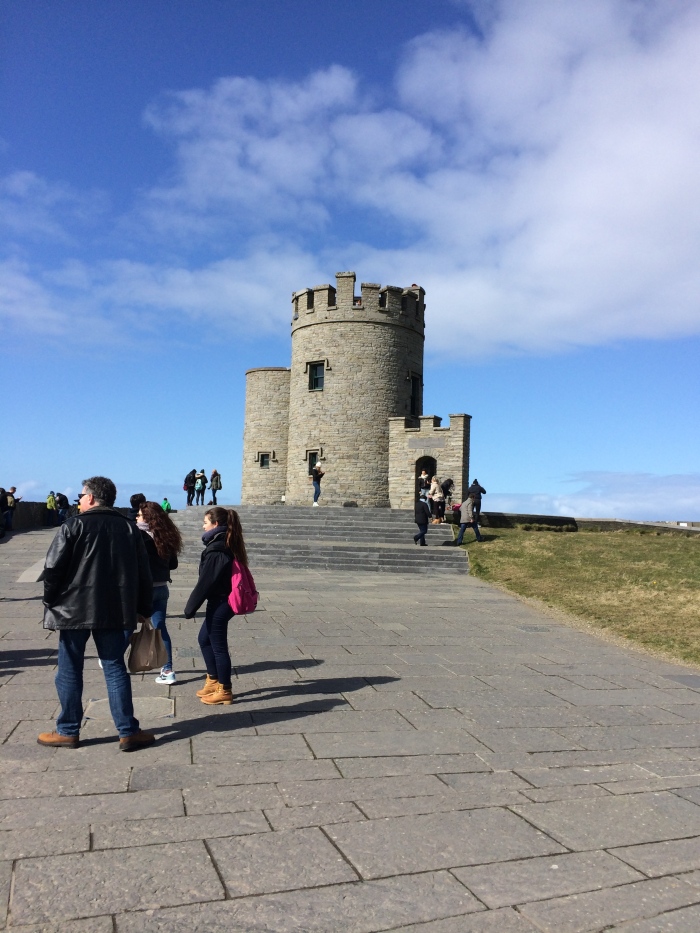 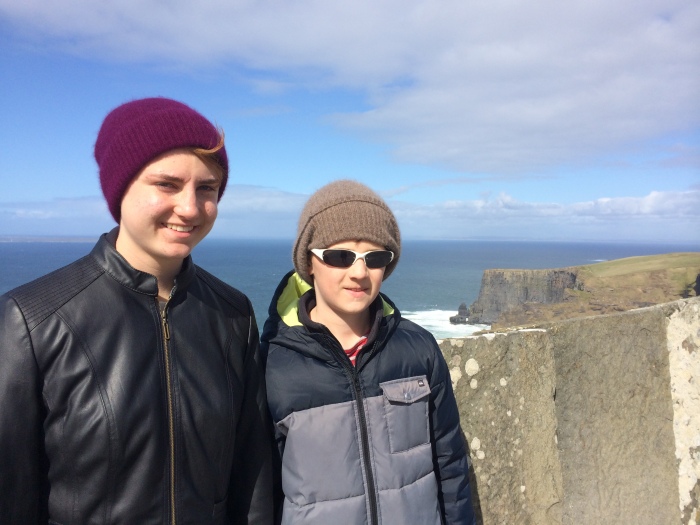 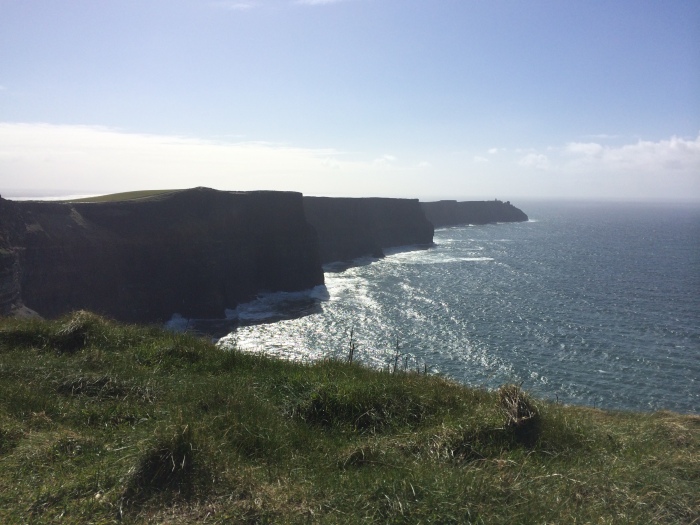 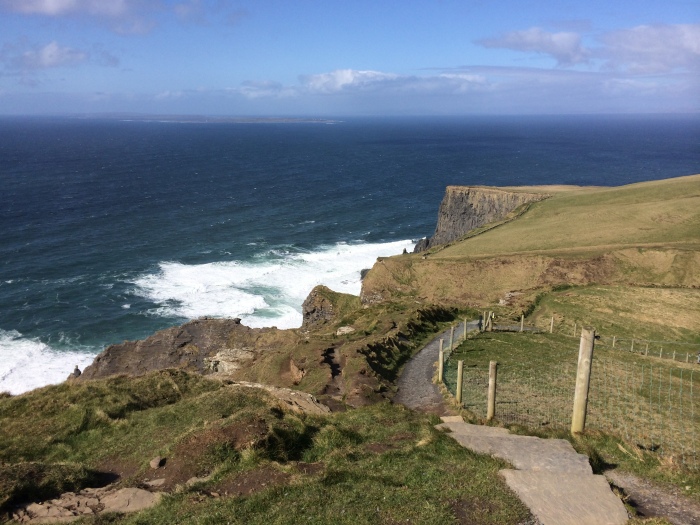 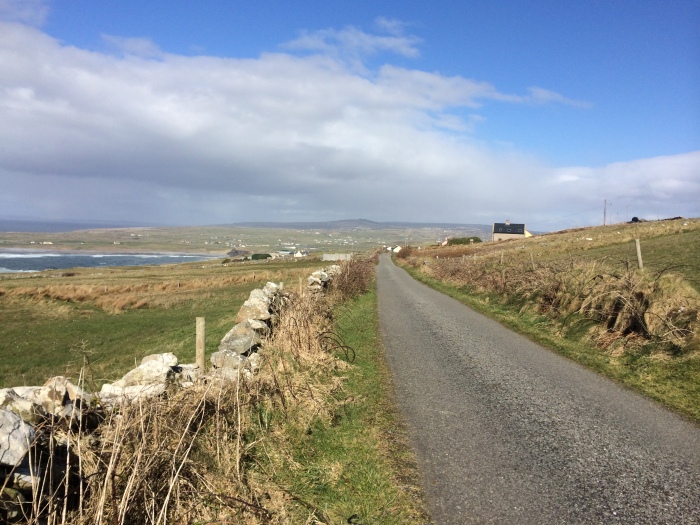 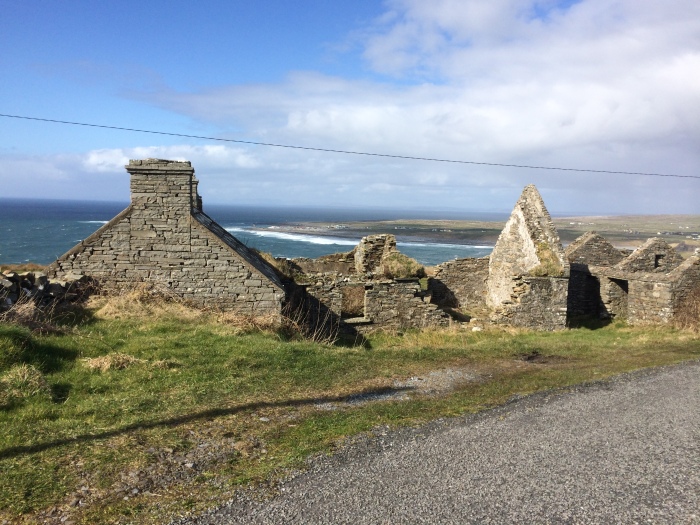 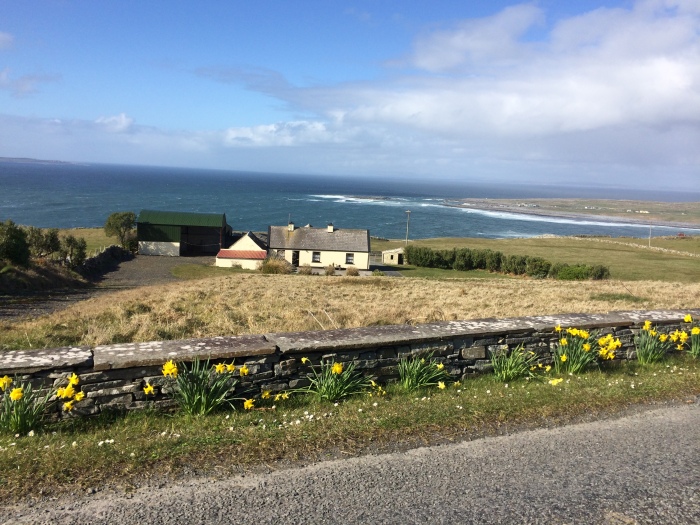 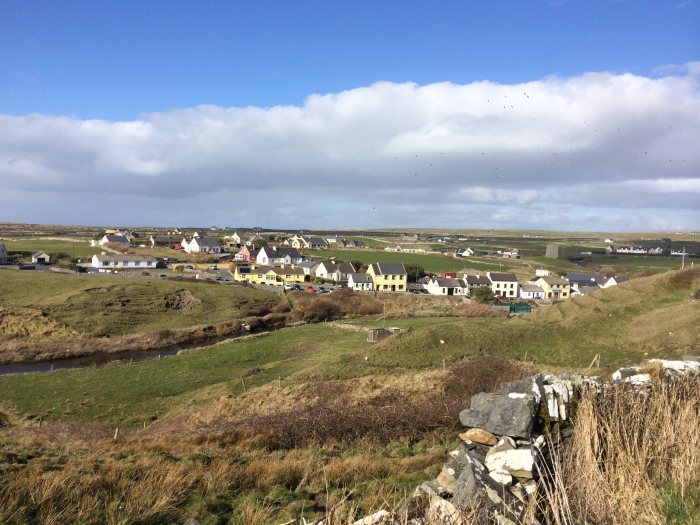 Today (Friday) we walked around Galway a little.  Laurel had a terrible sore throat and couldn’t speak because of the pain.  She typed messages to me on her phone and was learning American Sign Language and showing me the 2-second sign videos so I could understand and learn with her.  It was all quite pitiful. She looked up local pharmacies and handed me her phone to show me where I could buy her Ibuprofen. A little while later on the train she could say a few words with mere discomfort instead of agony, so that was nice.  Speaking of the train, I had to buy a second set of train tickets.  I bought round-trip tickets over the Internet a few weeks before the trip and typed in a code at a ticket machine at the Dublin train station Tuesday to retrieve them.  Unlike the British rail system that spits out tickets for each person for each leg of the journey plus a receipt, this machine only printed three tickets – one for each of us.  I looked at the wallet-size tickets to see if I was supposed to use them round trip, but it looked like it was only one way.  Today I again typed the code in at the Galway ticket machine, but it told me the code wasn’t valid.  I talked to the man at the ticket booth who took my phone and typed in the ticket number to his machine and asked if I had previously collected the tickets.  When I told him I had, he told me the tickets only print once.  If you lose them, you have to buy new tickets.  So I did, and the one-way cost as much as the round-trip.  Then there was a man checking tickets before we got on the train who asked why I bought three individual tickets when I could have saved money on a family ticket.  The expensive, in-person-purchase tickets do not have assigned seats; and there were no places where the three of us could sit together; so we went to our previously assigned seats and sat where our names were digitally displayed on the wall above the seats.  Then just before we got to Dublin, a ticket taker came around, and I thought I should explain why I was sitting in our previously assigned seats which didn’t match the tickets I handed him.  He told me I should try to get a refund when we arrived in Dublin.  The Dublin ticket-seller young woman who seemed defeated by her job and wretched customers explained that she couldn’t give me any money back because unlike the airlines, the train tickets are good for any time.  I pointed to the specific train time listed on my e-mailed confirmation.  She said that since I could pay a small fee to go on a different train, the tickets are essentially good for any train and therefore only print once.  “We don’t escort you to the train to make sure you get on the train, unlike the airlines do when you get on a plane.”  I have no idea why that makes sense, but it was clear she wasn’t budging.  We walked back to our overpriced hovel and daydreamed about our new home in Denver.

This pub is known for its great, local, nightly music. When we went at 9 pm, there were plenty of customers, but no music. Hopefully we’ll be able to hear some Irish music in a Dublin pub before we leave.

Next to the River Corrib in Galway – Laurel accommodated me with a big, fake smile despite her suffering.

Reading over this post, I know I sound like an ungrateful wretch.  I realize the kids and I, in some ways, are fortunate to be able to do this world traveling.  Ireland is just so different from what Wayne and I experienced in 1998.  With Wayne driving, we were able to see tiny towns and interact with locals.  I remember an old woman walked with us down a country lane to her home and let us use her phone to call our B&B when we got lost.  The architecture Wayne and I saw in southwest Ireland was just so lovely with the colorful row houses and pubs.  Dublin and Galway are big cities that are accessible to lots of tourists like us and without the colorful row houses (with the possible exception of the last photo).  The Cliffs of Moher was beautiful and the walk to Doolin was lovely.  Overall I needed to manage my expectations though.  I had 1998 southwest Ireland in mind, and that’s not what we saw.  I will say though that Wayne and I were also surprised by how trashed the countryside was; there was trash blowing everywhere.  Shortly after our visit, Ireland passed a plastic bag tax which not only greatly reduced (by 90%, I think I read) plastic-bag usage but paid crews to pick up the litter.  The kids and I saw almost no litter.  We also paid 0.22 Euro per plastic bag at the grocery.  When I suggested a plastic bag tax in Castle Rock, my name was mud.  I never received e-mails, phone calls, or any kind of communication from constituents until I brought up the tax and the possibility of using a temporary clothesline in your own backyard (The Colorado legislature passed a clothesline bill, and the governor signed it into law a few months after I left council).  I couldn’t even get another council member to second my bag-tax motion.  No one wanted to be associated with it.  Well, Ireland seems to be doing fabulously with theirs.  Breckenridge, Colorado has one.  Many of the places we’ve visited have one, and it hasn’t hurt tourism a bit.  Just sayin’.

3 thoughts on “Galway, Aran Islands, and the Cliffs of Moher”