I closed on the Colorado Springs house and we drove part way to my Mom’s house one year ago today. I remember that day as being extremely stressful. Laurel remembers it as extremely stressful in an hysterically funny way. Here’s a summary:
I woke up (I didn’t really sleep that night.) on an air mattress in the living room. The kids were sleeping on the one remaining mattress in the house which was in my bedroom. As I was making breakfast about 5 am, Charlie walked out to the kitchen, puffy-eyed from tiredness, and said joyfully, “I am so excited that we’re moving around the world today!” My friend Crystal around the block and her husband Mike walked over to get the mattress after the kids woke up. They had bought my bedroom set from me but let us keep the mattress until the end.
I drove to the west side of town for a 7 am dental appointment to get a crown. I haven’t had a cavity in my adult life until a couple weeks before we moved, and then I needed a crown. My awesome Danish dentist, who doesn’t generally show much emotion, got teary-eyed when I told her about Charlie’s “around the world” comment. “You should put that on your Facebook,” she said.
When I returned home, Laurel had made tremendous progress packing. We had sold or given away nearly everything we owned, but the little stuff – toiletries, clothing, food, garbage cans (not so little), paperwork to put in storage – we had to get everything out of the house for the walk-through at 1:00 and closing at 2:00. Laurel had an orthodontist appointment in Castle Rock at 11 am. Crystal came over again, hair in a ‘do-rag, asking what she should do. I really put her to work, including driving my computer to the electronics recycling center on the east side of town. Then I called my friend Sandy to ask her if she could drive Laurel to Castle Rock. Thank you, Sandy! If she couldn’t have, I don’t know what we would’ve done. I guess we would’ve missed the appointment, had to reschedule, and stay in a hotel or with friends until we could get another appointment. Laurel says getting into Sandy’s car was like being transported to another world. She went from the high-stress chaos at home to Sandy’s soothing radio music. She could just sit back and relax. Meanwhile I still needed to stuff everything into the car, scrub the bathrooms, clean out the fridge, get rid of remaining items in the garage. Our realtor’s husband came over to remove the “Sold” sign while I was sweeping the garage. He looked at me confused and said, “Don’t you close today?” “Yeah,” I said sheepishly and continued to scurry. Kathy & Gil across the street agreed to let me put my garbage in their cans. Neither of us realized how extensive that would be.
A torrential downpour and thunderstorm started about 12:30 pm. I had just finished vacuuming at 1:00 when the buyers and their realtor arrived. Charlie sat in the car with the window down just enough to get fresh air but not enough to get drenched. I ran through the rain to Crystal’s, leaving my vacuum there along with our suitcases to be picked up after closing. Charlie and I drove to a Wendy’s restaurant on the north side of town where we met Sandy and Laurel who were nearly finished with their lunches. After a quick bite, it was time to get over to the title company for the closing. As Sandy started to say goodbye, I asked if she could drive Laurel over to the title company since there was no room in my car for Laurel. After the closing, the rain had stopped and I was able to rearrange some items in the car so Laurel could sit in the front. Then it was off to the storage facility to drop off papers and stuff. Then it was Crystal’s house to get our suitcases and say goodbye. Then it was off to the credit union to invest the money from closing. Then we drove across the street to an Indian restaurant where we met two young, Catholic priests (wearing shorts and short-sleeve shirts), one a white man from Wisconsin, the other an Indian man. They heard Charlie telling the waiter of our travel plans and came over to suggest we travel to India.
Then we drove over 200 miles to Colby, Kansas where we spent the night at a Sleep Inn (And I did! Probably the best sleep of my life.) – ready to face the next day of driving to Columbia, Missouri. 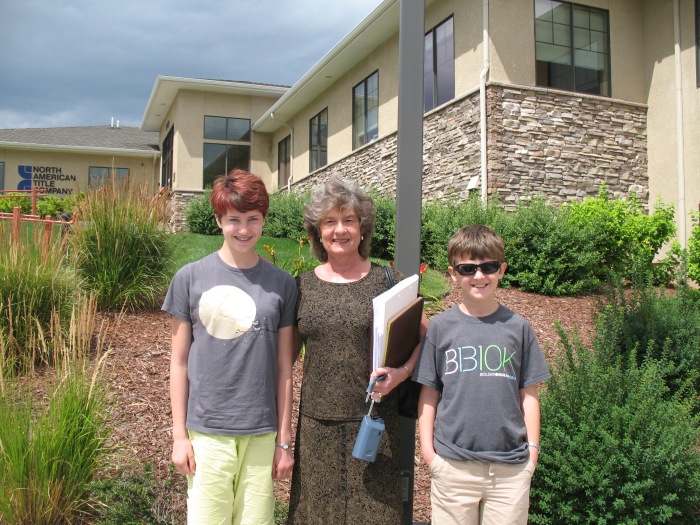 Just after closing at the title company with our realtor, Janet

At a rest stop in Kansas the next day – July 30, 2013.
Unfortunately, we didn’t take a family photo at the house on moving day.

One thought on “Our travels – one year in”