We took a 5-hour train ride from Toronto to Montreal on Friday, August 1. It was a full train (although there were assigned seats like on a plane) with a line of people stretched all around the inside of the train station waiting to get on. We found out it was because it was a civic holiday/long weekend in most Canadian provinces. Mauricio, a native of Columbia and the owner of our Montreal apartment, picked us up at the Montreal train station and gave us a quick tour of the apartment. Both Friday when we arrived and this morning when I went out to run an errand, I had difficulty managing the three sets of French doors to the building (The kids opened the doors the other times we’ve left the building.) and encountered the same woman who was also coming in and out each time. It was embarrassing. Coming in to the building, I wave a fob under a box on the outside wall to unlock the first set of doors. With each of the three sets of doors, only one door is usable; and I keep forgetting which that is. The second set has no locks, but I have to remember that only the door on the right opens. The third set is iron-grate doors that open (the left one does anyway) after I type in the five-digit code on the wall keypad. As I leave, I have to press a button at the same time I’m pushing on the first doors; then I walk through the second set of doors, then turn the top lock (not the bottom as I thought earlier today!) on the third set of doors. So yay! I’ve made it outside in Montreal! I’m pretty proud of that. We’re on the third floor of this building, but it’s not three floors up from the ground because the ground floor is called “RC,” and you have to go up one and a half flights to get to the first floor. I looked up RC and found that it stands for rez-de-chaussée which is the ground floor. Is this too much information?
Yesterday we went to the Grande Bibliotheque, a large, modern library and archives where we looked around and where I printed a one-page form that I had to mail to the attorney who is handling my mom’s estate. Although we’re learning a bit of French with Rosetta Stone, I did not feel at all confident in my ability to ask how to get a password to access the library computer and print something. I wanted the librarian to know, though, that I am trying to be a good tourist and am learning the language.
“Good day, Madam. My mom is dead. I would like to print a document. Do you speak English?” I practiced in French. Ultimately I decided there’s a fine line between being a polite tourist and babbling incoherently. I simply asked the librarian (in French) if she spoke English. She gave a weak nod and we proceeded, but I threw in as many “oui”s and “merci”s as I could. Printing the document presented its own challenges which I had not anticipated. I tried repeatedly to log in to my Google Mail account but couldn’t figure out how to type the at sign, @. I can usually log in without doing the “@gmail.com” ending, but I couldn’t log in without it this time. I could see the @ on the 2 key, but the shift (or shift-like key) typed a quotation marks instead since quotation marks and @ are both on the 2 key of French keyboards. How ’bout the command key and the 2? No. The alt key and the 2? No. The alt key and the command key and the 2. That did it! Then it wouldn’t accept my gmail password because it’s case sensitive and caps lock was on, but I couldn’t turn it off. I eventually logged in and accessed the document which was attached to an e-mail, but it was an education in a different keyboard. Since French has diacritical marks that English does not, their keyboard keys have to have more functions then ours.
Montreal is a beautiful city. Vancouver is pretty because of the forests, sea, and moderate weather. Montreal is pretty because of the centuries-old architecture, cobblestone streets, horse-drawn carriages (for sightseeing), and chiming church bells. Of course, there’s plenty of new stuff – plain skyscrapers and highways – but we’re in Old Montreal/Old Port and staying in the Old Telegraph Building, built in 1901.
Montreal is an island in the St. Lawrence River/Fleuve Saint-Laurent. A fleuve, I found out, is a river that flows to the sea. The St. Lawrence River starts at Lake Ontario and flows northeast all the way to the Atlantic Ocean.

There were fireworks Saturday night which we and some other building tenants watched from the rooftop of our building. 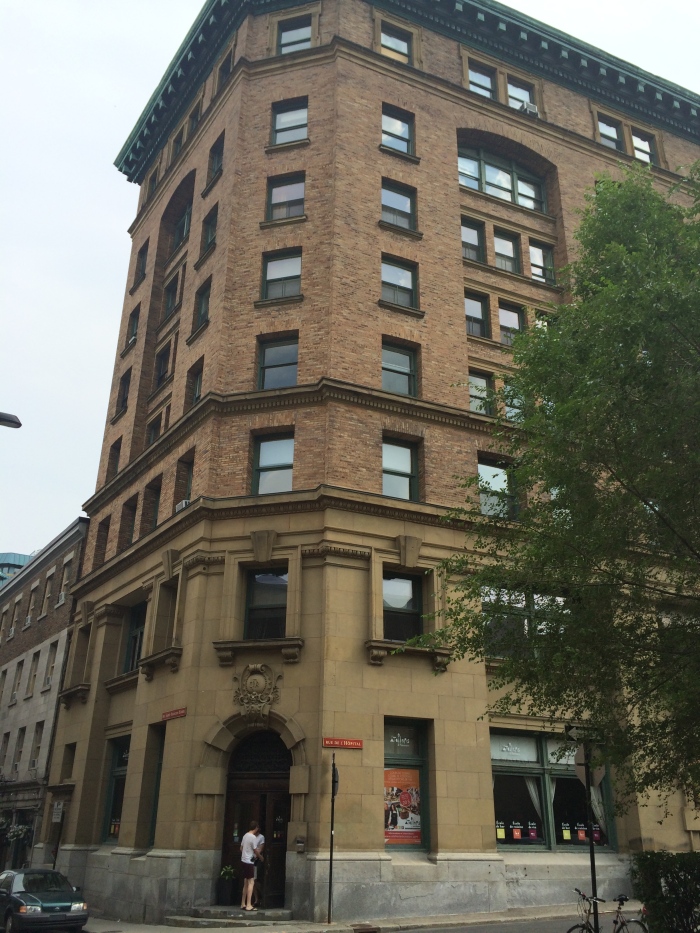 The Old Telegraph Building where our apartment is 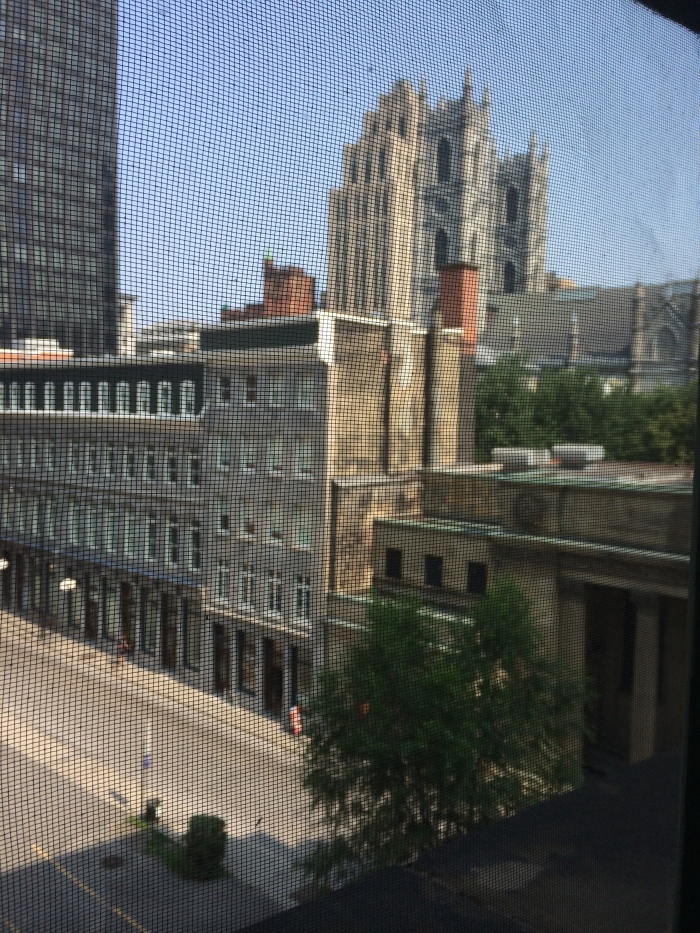 One of the views from our apartment window includes the Basilica of Notre Dame, built in 1830, whose twin spires you can see here. Celine Dion was married there. We’re going to tour it, (You have to pay for that.) but it’s closed on Mondays as are many public places here. So maybe tomorrow… This whole part of town has saint street names – St. Francois Xavier is the adjoining street – and several large beautiful churches which are major tourist attractions. St. Joseph’s Oratory, not far from here, is the largest church in Canada. 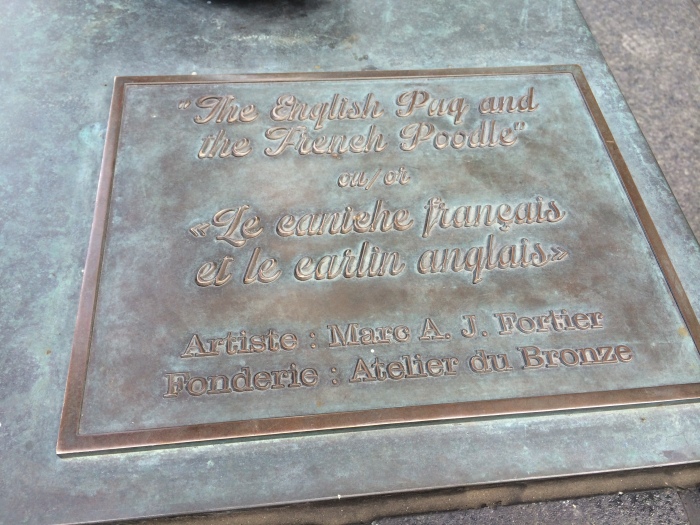 And here are a few more photos from Niagara Falls and Toronto.

The falls are lit in different colors at night. We took this one of the American Falls from our hotel room.

A view from Skylon Tower in Niagara Falls 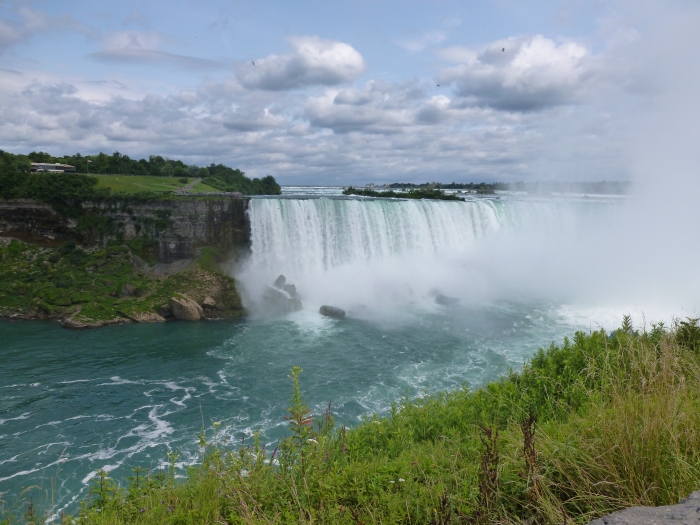 Laurel took Charlie swimming a couple times at the pool in our Toronto apartment complex. 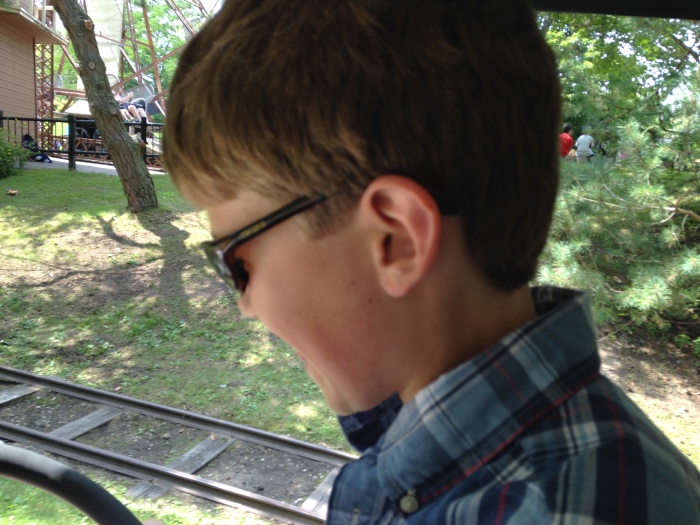 Laurel took Charlie back to Centerville Amusement Park on the Toronto Islands since he enjoyed it so much the first time. Here he is driving the antique car while Laurel is a passenger.

Charlie got to ride in a bumper boat at Centreville the second time he went.

2 thoughts on “Montreal and stuff”