Sorry I messed up the days on the previous post (now corrected).
I have to start off with Colorado news. I read the top story and watched the video on cnn.com about the flooding in Boulder and Lyons – 6 inches of rain in less than a day, a 500-year flood. How awful. It seems exceptional (in a terrible way) weather is now the norm. We have to adjust to a very different world.
The kids and I got a late start today and suffered under extraordinary (maybe not so extraordinary anymore) heat and humidity as we walked from the train station to the Lincoln Memorial. The sweat poured off us. After lunch and a helpful cloud cover, we walked to the Vietnam Wall. The kind park ranger staffing the Memorial told us a bit about the layout of the wall and the number of soldiers who died (as well as eight female nurses). As he told me this, nearby there were two elderly men who were wearing WWII-vet caps and sitting in wheelchairs and an elderly woman making a stone rubbing. It’s impossible not to get choked up trying to take it all in. I thought of my friend Ruth whose son Andy, a Vietnam veteran, died of cancer which was probably caused by Agent Orange and whose name is not on the Wall. I also thought of an NPR interview I heard a few months ago with the father of a soldier who served in Afghanistan and who killed himself shortly after returning home. The young man had severe PTSD but did not receive treatment from the military. The father cried when thinking of a memorial near their home for fallen soldiers. “My son’s name should be on there,” he sobbed.
We walked to the White House and then the Capitol. We didn’t have tour reservations at either place so we were only allowed to look at them from the outside which doesn’t seem appropriate for a republic. Walking back to the Metro station from the Capitol, there was a thunderstorm, and we arrived drenched and dripping at the station. For reasons we have yet to understand, we were the only wet ones on the subway. 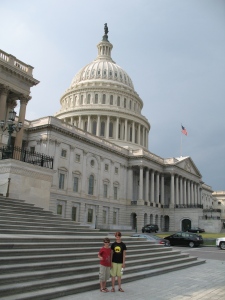 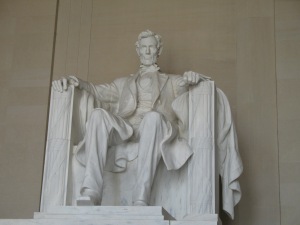