We flew from DC to Chattanooga on September 13 and are flying back to Colorado in the morning (the 21st). We came here to visit homeschooling friends, Lance and Elyssa, from Colorado Springs who moved here with their five kids in 2012. They bought five acres of land to farm and, with their friend Dan who moved here with them, spent the last year and a half clearing the rocky, wooded land and building and expanding their and Dan’s homes. I didn’t get any interior photos of Lance’s and Elyssa’s 200-square-foot house, but Lance has made extremely efficient use of the space. The kids’ beds come out from the walls staggered. Three-year-old Havilah, the only girl, sleeps in a playpen while Lance and Elyssa sleep in an elevated bed on the other end of the house which is above the kitchen table. They have a flock of chickens and will eventually have an orchard with apple, peach, and pear trees. Their existing home will eventually be their greenhouse after they add on. They have so much rain and their water use is so low that they don’t even have to dig a well despite their large family. They collect the rain water and filter it through several layers for their drinking water. They also have another collection tank set up to provide their shower water and another for their clothes washer which is powered by a generator. Their toilets (one inside and one outside) are composting toilets that use no water; just throw in some sawdust when you’re finished. After they cut down more trees and get a little more sunlight, they’ll be able to install solar panels which will then provide some of their power.
Laurel, Charlie, and I stayed in a cabin in Alabama overlooking the Tennessee River about a half-hour drive from our friends’ land (west of Chattanooga) and about 40 minutes from Chattanooga.
Chattanooga has a great downtown which includes an aquarium; parks along the Tennessee River; the Hunter (art) Museum; great, funky, sidewalk cafes (including The Mellow Mushroom); bicycles for rent; pedestrian bridges; carriage rides; riverboat rides; the Creative Discovery Museum for kids…
Near Lance’s & Elyssa’s house is a pretty park called Foster Falls, but the normally roaring waterfall was just a trickle when we were there. Mosquitoes are plentiful everywhere though. Before we left DC I took a picture of Charlie’s arm which was covered in bites. (A tour guide told us that DC was built on a swamp, and I believe it!) We then got loads more bites in Tennessee and Alabama. Laurel stopped counting at 60 on herself.

view from our Alabama cabin

Isaac had to keep blowing air on the dinner fire to keep it going. The wood is very wet from the frequent rain. It’s quite a change from the typical Colorado forest where an errant spark can mean catastrophe. 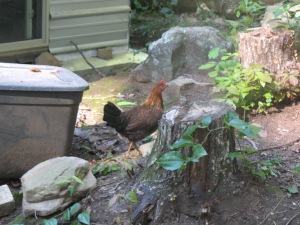 In addition to Rock City, we saw the two other Lookout Mountain attractions – the incline railway and Ruby Falls – a waterfall in a deep, underground cave.

“Rocky Top,” Tennessee’s state song, is very popular (or at least used to be) at wedding receptions in the Cincinnati area. When I read the song name on the stone, I couldn’t stop serenading the children with it (including the twang, the hand clapping, and the foot stomping), much to their delight, I’m pretty sure. 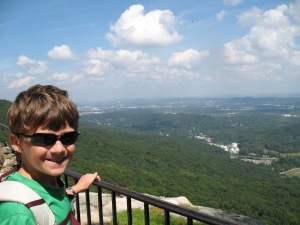 Our friends’ dog, Dingo, is just that – an American Dingo or Carolina Dog – one of only a few breeds of dog in the Americas whose DNA indicates they came from Asia millennia ago across the land/ice bridge that connected the two continents.

The Sequatchie Valley Institute hosts a homeschool event each week that our friends attend.