On Monday we took three trains to get from our Lower Manhattan apartment to the airport in Queens, flying out of JFK into Washington DC (Reagan). DC, at least the parts we’ve seen so far, is a very different city from Boston and New York. We’re staying in the basement of a house that’s near Embassy Row…I’m not really sure what this neighborhood is called though. (We’re near the Russian embassy which is really cool…and kind of scary.) This neighborhood has big, beautiful homes and lots of trees. Tuesday we walked to the National Zoo and then took two trains to the Smithsonian Air and Space Museum. Wednesday we again walked the 1.3 miles to the Metro rail stop and then took two trains to Arlington Cemetery. It’s a very moving experience, but it was so ungodly humid and hot that we didn’t see as much as we otherwise would have. Then we got back on the train and went to the Library of Congress which is spectacular. We went on a free tour, and the docent who first spoke said, “I told an earlier group that this is the most beautiful library in the country. One man corrected me and said, ‘It’s the most beautiful building in the country.'” We saw a Gutenberg Bible (behind glass), the contents of Lincoln’s pockets the night he was assassinated, and “the most un-American building in Washington,” according to Ron, our tour guide. The Library “is an Italian-Renaissance palace that we dedicated to ourselves,” he said. After the library we again went to Air & Space to try to see a few more exhibits. (Ask Charlie about the four forces of flight!)
We have only one more day here before flying to Chattanooga to visit friends. We’re renting a cabin in northeastern Alabama and will not have wifi. So…I’ll either update the blog when I get to Barb’s house in a week and a half or when we get to Oceanside, California on September 24.

A friendly passerby suggested we let her take our picture in front of this beautiful fountain…she just didn’t get the fountain in the photo or tell me she was taking the picture. 🙂 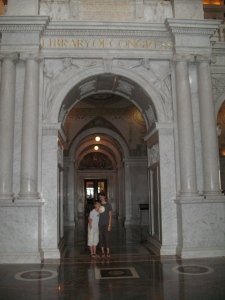 A portion of Robert Kennedy’s grave – The first time I saw it (20 years ago), there was a reflecting pool at the base, but none today.