We flew from London City Airport, one of five London airports, to Dublin Sunday night and enjoyed our taxi driver’s lilting brogue and commentary on the ride from the Dublin airport to our apartment.  The tiny apartment requires planning and coordination of movements in order to dry the laundry on the drying rack and move the second mattress from its vertical daytime position in the bedroom to the living room floor at night.  The night we arrived there was a cot and mattress set up in the living room, but Laurel knelt on the cot to reach something on the nearby cabinet and heard a wood plank split beneath her knee.  We folded up the cot, and I spent a mostly sleepless night on the thin, foam mattress on the floor.  The next day we walked to Mattress Mick and bought a real mattress which was delivered Tuesday.  Daragh and his boyfriend who own and manage this unit do a lot of talking but are not terribly concerned with such matters.  (Daragh scolded me for allowing Laurel to kneel on the cot as it was not built to withstand that pressure.)  Oh well.  We’ll be at our own home in Denver soon, sleeping on real beds. Monday (before visiting Mattress Mick) we walked to Trinity College where Charlie took one look at the campus and announced, “This looks like Auschwitz.”  It kind of does.  Auschwitz is mostly two-story, brick dormitories built for Austrian soldiers when the Austro-Hungarian Empire controlled Poland in the early 20th century.  (Not to be confused with Birkenau which was built specifically as a Nazi death camp and which the Soviets mostly bulldozed upon liberation.)  Trinity College has mostly stone buildings but some brick.  Anyway, we were there to go to the library and see the Book of Kells, four books comprising the four Gospels, written and beautifully decorated with Celtic art, about 800 AD.  The books were kept at the Abbey of Kells, thus the name, for centuries before being moved to Dublin for safekeeping in the 1600’s.  Trinity displays two books, under glass, at a time and rotates them.  Of course, photography is prohibited, so I have none to show here; but I could hardly believe how old the books are.  They’re in excellent condition, and the art and writing – on calfskin – look perfect.

“Trinity coffee” from the college cafe includes Bailey’s Irish cream and cocoa and I don’t remember what all, but it was good! 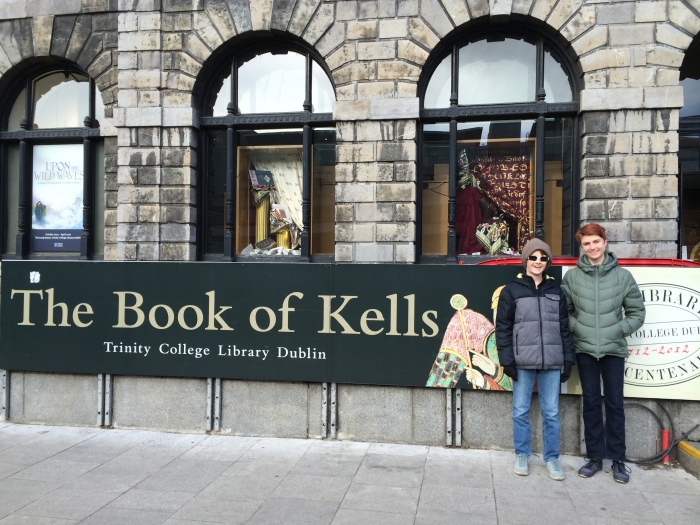 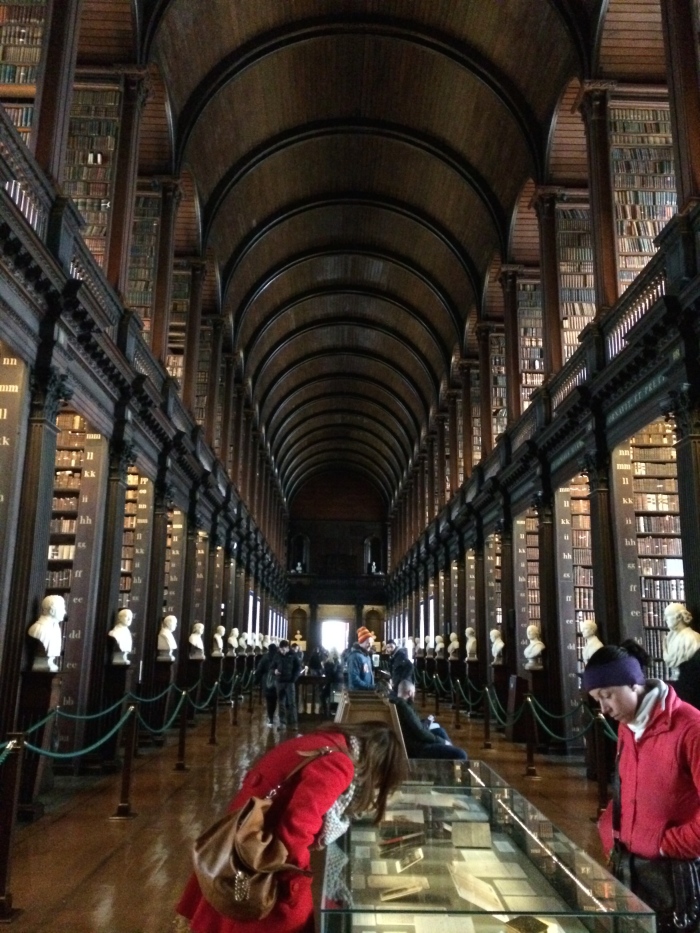 The old library (It even smells old.) at Trinity College

After Trinity we walked to Merrion Square, a beautiful park across the street from Oscar Wilde’s childhood home.  The park pays tribute to Wilde with a statue of him as well as a buried, wooden giant – based on Wilde’s short story, The Selfish Giant.

Tuesday and Wednesday we planned activities and ran errands, including buying mass transit cards.  There’s no subway here, but there are double-decker buses.  Since our apartment is centrally located, I don’t think we’ll be riding the bus much; but the payment system – inform the driver of your destination and pay the exact amount of one of 13 possible bus fares depending on distance traveled – seemed overly complex, and preloaded RFID cards seemed simpler to deal with.

Ha’penny Bridge over the River Liffey

Today – Thursday – we walked four miles round-trip to Glasnevin Cemetery where we took a 90-minute, group tour with a different Daragh, who also has the gift of gab.  Holy crap, that man can talk.  Of course, that’s a good quality in a tour guide; but man, did he cram a lot of historical facts into those 90 minutes.  He was all business – no smiling, no Q&A, no small talk.  I’m trying to remember the main points, but the short story is the Irish had no rights under English rule.  (The cemetery, where 1.5 million people are buried, was built/started in the 1830’s and coincided with the Irish Independence movement which ended with the War of Independence and Irish independence in 1922, followed by the Irish Civil War because of disagreement about Northern Ireland’s remaining part of the UK.)  Under English rule, Catholics – the vast majority of the Irish – could not vote, go to school, or own land (other than a tiny plot, large enough only to grow potatoes as an efficient source of calories – thus the devastating effects of the potato blight and resulting famine).  Laurel and I were reading online that the combined population today of Northern Ireland and the Republic of Ireland is still significantly less than it was before the famine.  Isn’t that amazing?  The world’s population has exploded; Dublin is a city of immigrants today with many Indians and Chinese as well as Americans and every other nationality.  And still the country has not rebounded from the famine.

One of several examples of graffiti which Laurel photographed today on the kind-of-gritty, north-of-the-Liffey side of Dublin where Glasnevin Cemetery is 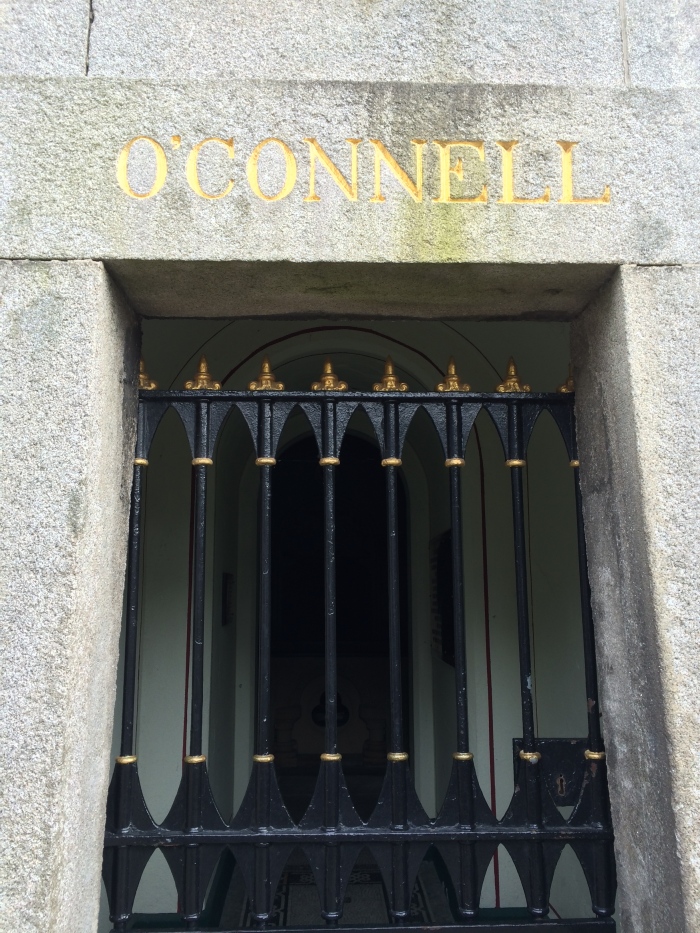 Daniel O’Connell has an enormous and beautiful tomb and tower and landscaping. We learned a lot about him, but now in my mind some colorful details are crowding out the substantive details of Daragh’s monologue. Essentially though he started Glasnevin Cemetery because the English Penal Laws prohibited the Catholics from having any kind of public ceremony when burying their dead. O’Connell, an attorney (who received his early education in France because of the laws against Catholics being educated in Ireland) wanted both Protestants and Catholics to be able to have dignified burials. Frederick Douglass, the American abolitionist, sailed to Ireland in 1845 and met with O’Connell. From the website Irishamerica.com:
Today, O’Connell is largely remembered for winning Catholic Emancipation (the right of Catholics to sit in parliament) and for agitating to achieve independence for Ireland. But for Douglass, and thousands of other abolitionists throughout the world, O’Connell was known for his outspoken statements condemning slavery. By 1845, the Irishman was the most influential and outspoken critic of slavery in the world. It was natural that Douglass should want to hear O’Connell speak.

The Celtic cross combines the Christian cross with the sun which the ancient Irish worshipped. On top of these two is a roof, symbolizing a church that accommodates them both.

Tomorrow we will tour the Irish Whiskey Museum.  Then we’ll probably visit more parks over the next few days.  On Wednesday we’ll go on a bus from Dublin to Belfast and take a taxi tour of Belfast and then back on the bus (I think.) to Giant’s Causeway on the northern tip of Northern Ireland before returning to Dublin for a total tour time of 13.5 hours.