Here’s our getting-to-London story: On January 22, Laurel carried her guitar, suitcase, and backpack down the six-story winding staircase of our Paris apartment while I carried Charlie’s and my suitcases and my backpack.  (I had to make two trips on the suitcases.)  We walked 1/2 mile with our luggage to the subway station and arrived at a station near (but not near enough!) Gare du Nord from which Eurostar’s Chunnel train to London departs.  The two stations are connected, but Gare du Nord is enormous and has many train lines – subway, regional, international, different train companies.  We went up and down many flights of stairs with our luggage looking for Eurostar signs.  Getting through the turnstiles was a challenge.  I asked Charlie to carry his suitcase down one flight, and he dropped it and did a slow-motion roll down a few of the stairs and then screamed.  A crowd started to gather, and I gave a weak smile, explaining that he was fine.  We continued on with my carrying both our suitcases on the stairs.  After finally finding the Eurostar area and printing our tickets, the ticket-scanning machine wouldn’t recognize the tickets because the ink cartridge needed to be replaced in the ticket-printing machine.  A woman at a ticket booth slowly entered each ticket’s information, and we went on to Passport Control.  The passport agent continued his personal conversation with a fellow agent in his booth but eventually and reluctantly stamped our passports.  I then filled out a lengthy form to hand to the UK passport agent who also needed to stamp our passports.  Then we went through security which had a very steeply-angled conveyer belt on which I had to place our luggage to be x-rayed.  The luggage kept rolling off, and no one would help me.  I just kept putting it back up there, but due to the rope/fences, I could only get so close to the machine.  Finally they stayed, and we went through security.  We regathered our belongings and ran like hell to our gate where we arrived five minutes before departure.  However, we were not allowed on the train because we needed to have arrived at least ten minutes before departure.  The agent was kind and said she would put us on the train that departed one hour later for no additional charge.  I didn’t mind waiting in the station, but I had to let the Airbnb owner know that we would be late.  She replied to my e-mail saying that I should hurry (Huh?) since the cleaning lady who would be letting us in and showing us around needed to get home to her young child and that the washer/dryer stopped working that day but that a repairman was coming Monday.  (He did fix it on Monday, but we seem to be jinxed with poor-functioning or non-existent laundry facilities in our travels.)  On board the train we learned that there was a technical problem in the tunnel, and we would be a half hour late getting into London.  Once we got to London, I didn’t want to deal with the trains and decided to take a taxi, but we never did find the taxi stand.  Eventually we found a taxi driver (not the certified variety, but I was desperate) wandering around asking if we needed a taxi.  It took 45 minutes just to get to West Kensington due to heavy traffic.  After we were at the apartment for about ten minutes, the taxi driver came back with my purse which I had left in his cab!  It contained all our passports, my phone, and every other important document and thing I own.  I tipped him but not nearly enough.  I was very grateful he found that and brought it back.  After the cleaning lady left, I prepared a grocery list and started out for the grocery since it was nearly 8 pm (9 pm Paris time), and we hadn’t had dinner.  The moment I got to the sidewalk, the electricity went out in the neighborhood, and an alarm across the street blared.  (The alarm continued for at least 20 minutes.)  I used my phone’s flashlight to find my way in the dark and asked directions of kind passersby on how to get to a grocery.  When I came to a busy, main road and saw that the lights were out there as well, I figured any grocery on that street would be closed because of the outage.  I unintentionally took a different route home and saw that the lights were on in the adjacent neighborhood where there was an open corner grocery!  I bought food; and the kind, older man behind me in line bought his groceries and then went home and found directions to my home after looking at Google Maps on his computer (I couldn’t get a good signal on my phone, and my battery was at 1%.) and came back out to tell me how to get there.  When I arrived home, Laurel told me that she had initially panicked because the outage and alarm reminded her of what she’d read about the bombing of London during WWII: the British government turned off the power throughout London so that the German Air Force couldn’t find their targets, and air-raid sirens would wail.  She eventually found an online article on her phone about the power outage, cause still unknown, saying that power had gone out in the Tube and people were trapped for an hour.  I’m so glad we didn’t take the train!

So anyway, we like London.  It’s good to speak English again without apologizing for it – not that we’re always understood or understanding with the different accents. 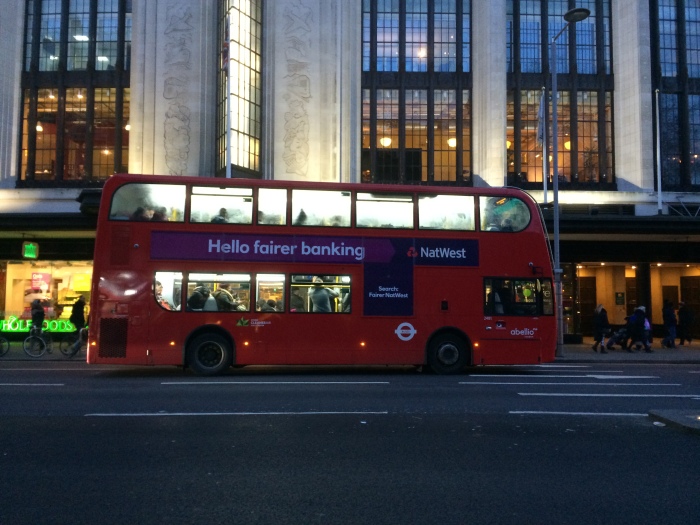 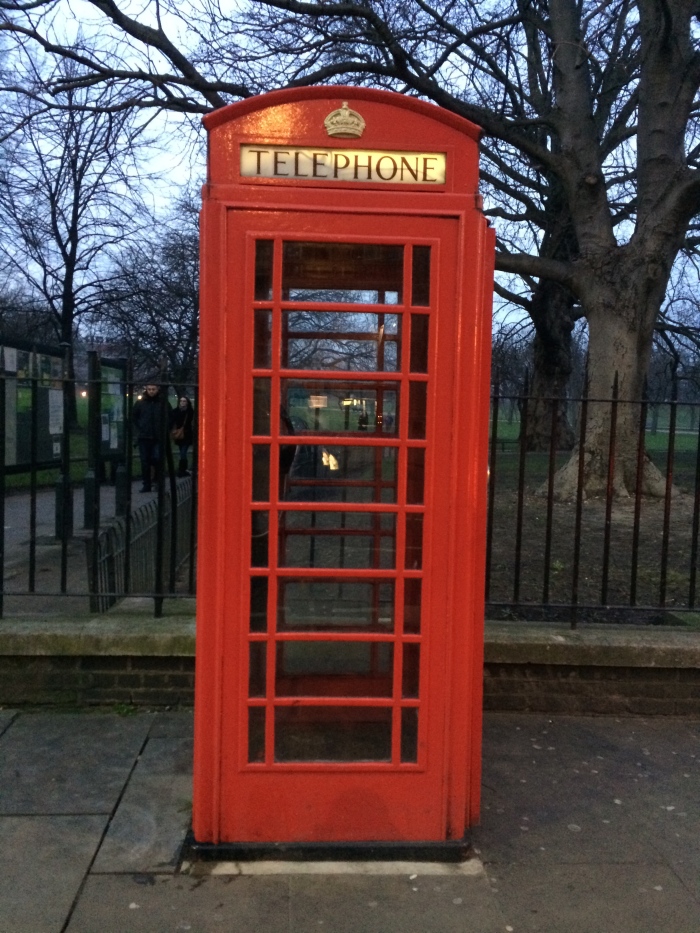 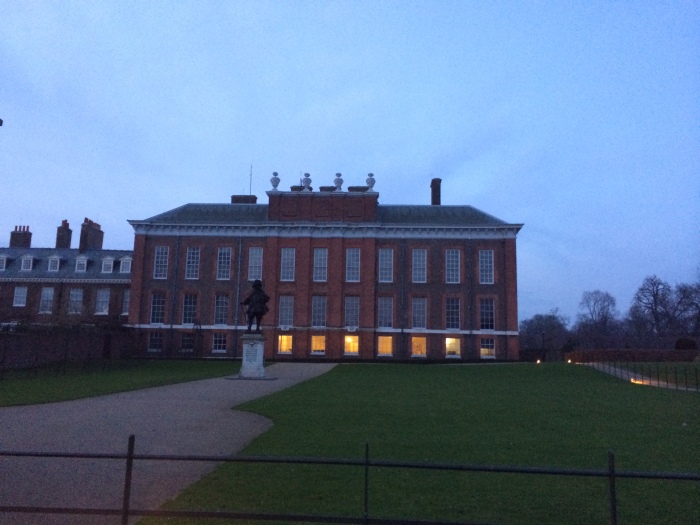 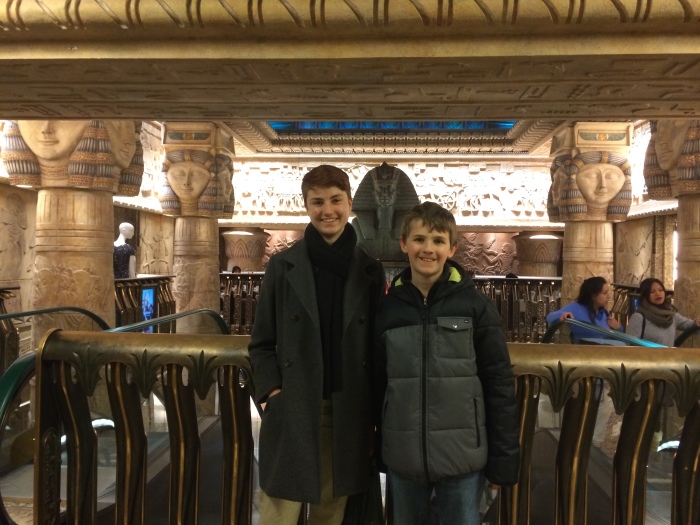 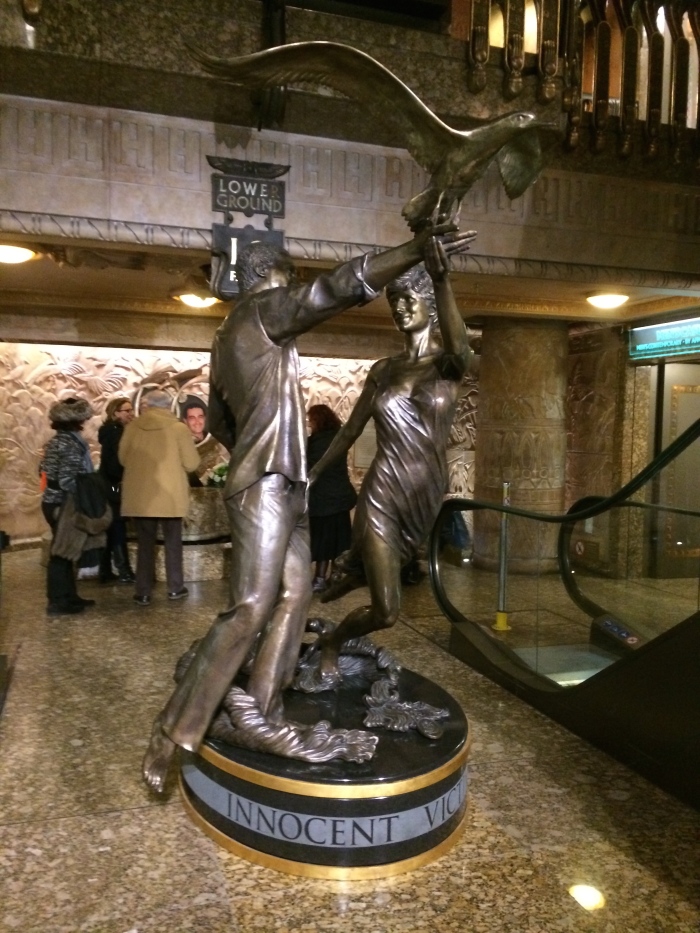 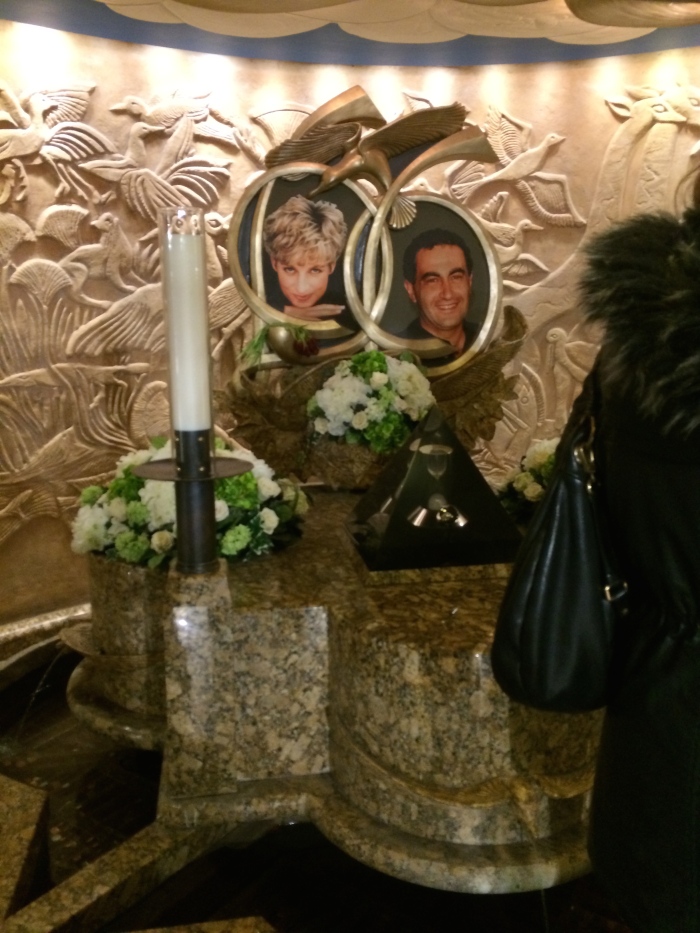 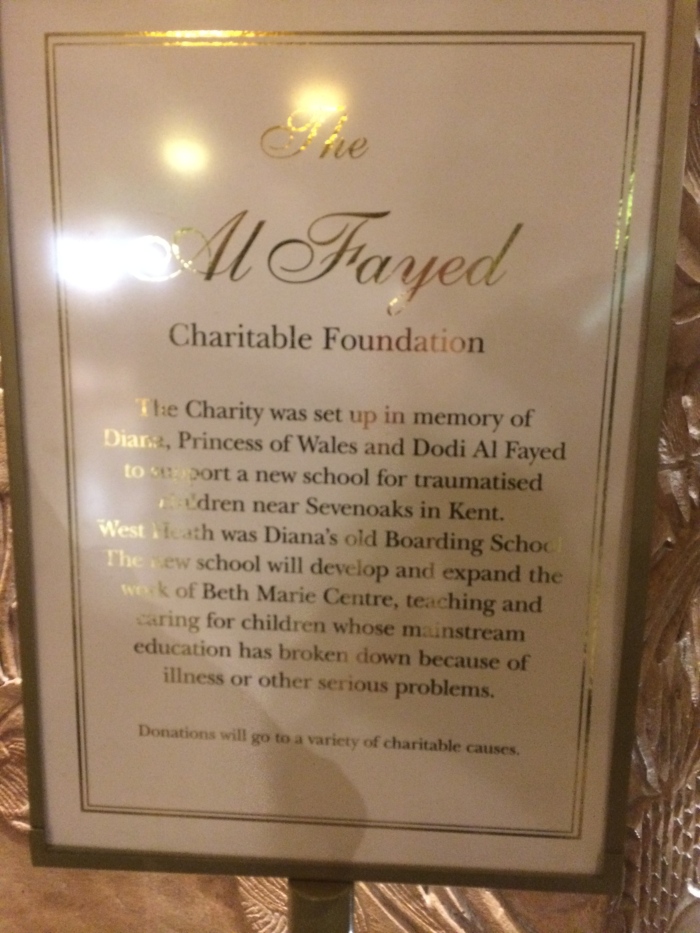 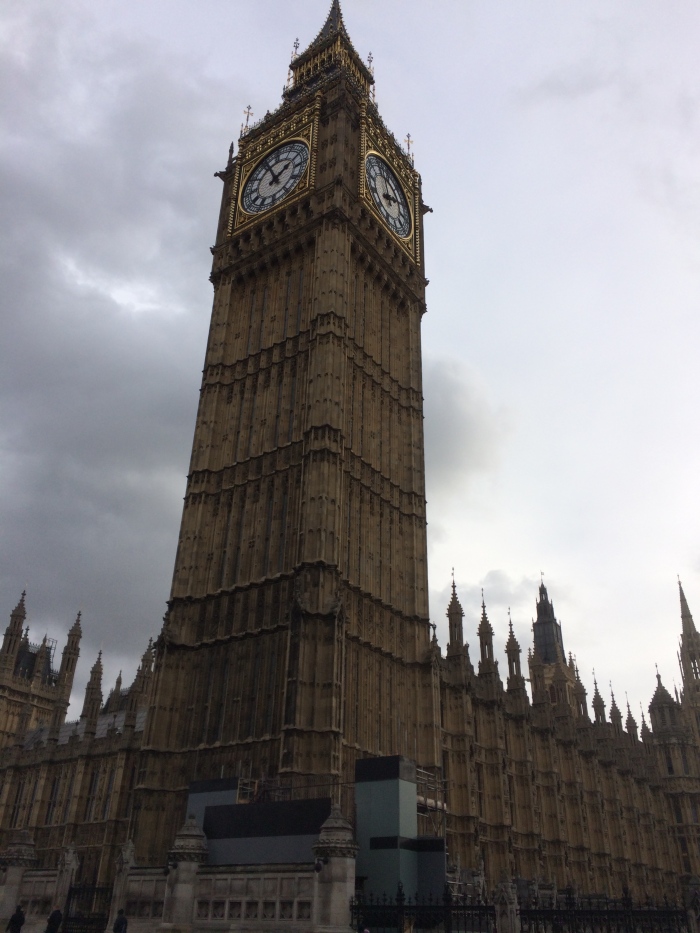 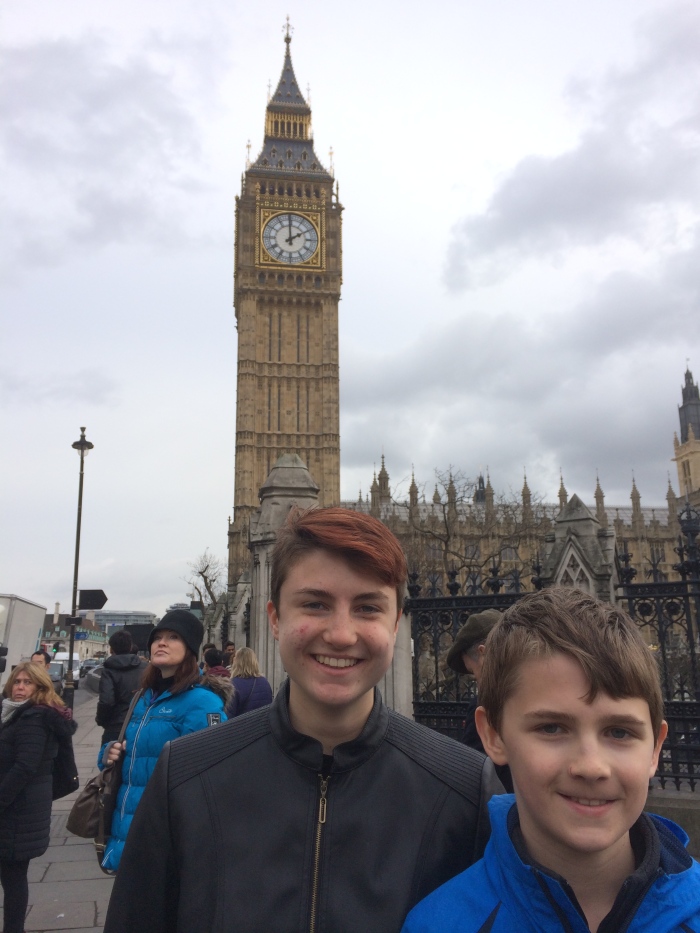 Westminster Abbey – We’ll tour the inside another day.  It will cost about 40 pounds/$60 for the three of us to go inside! 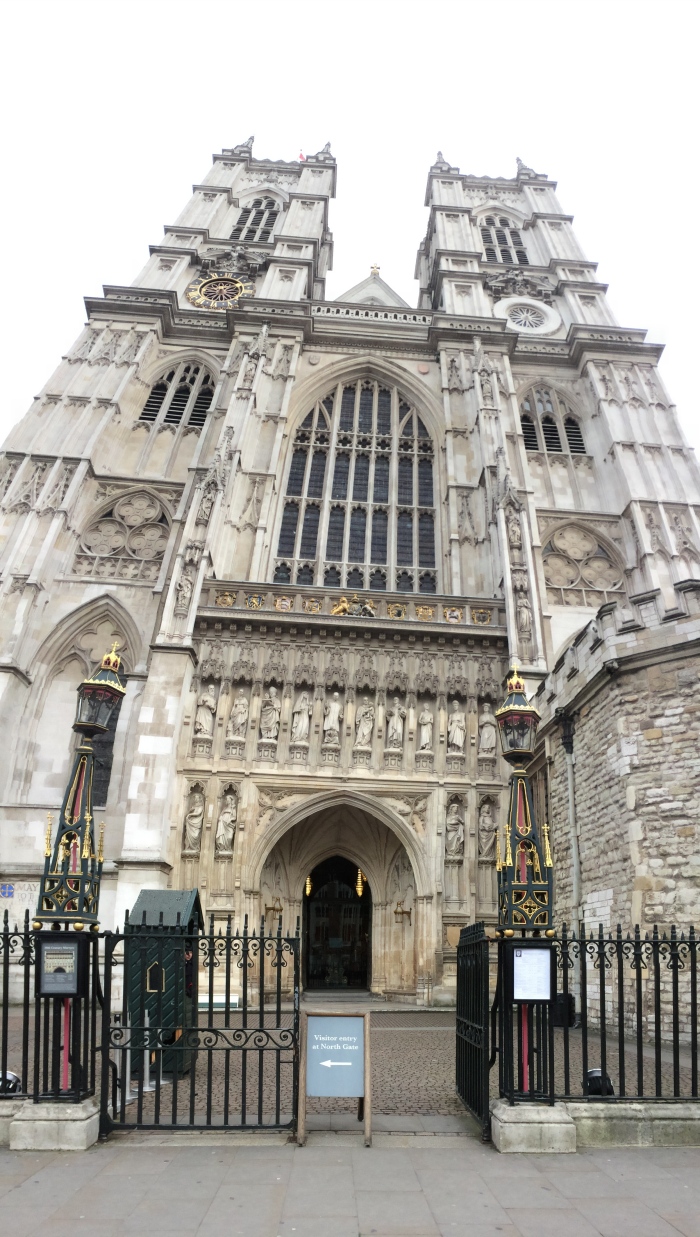 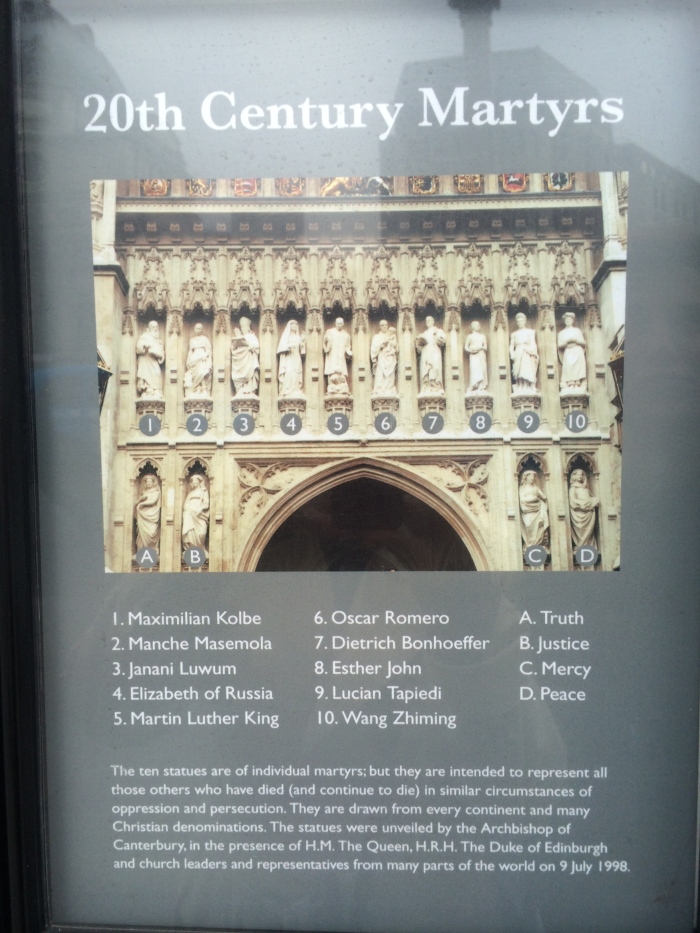 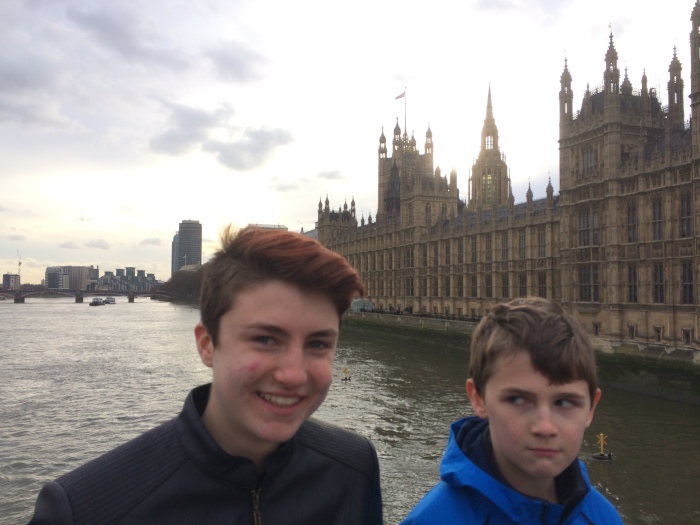 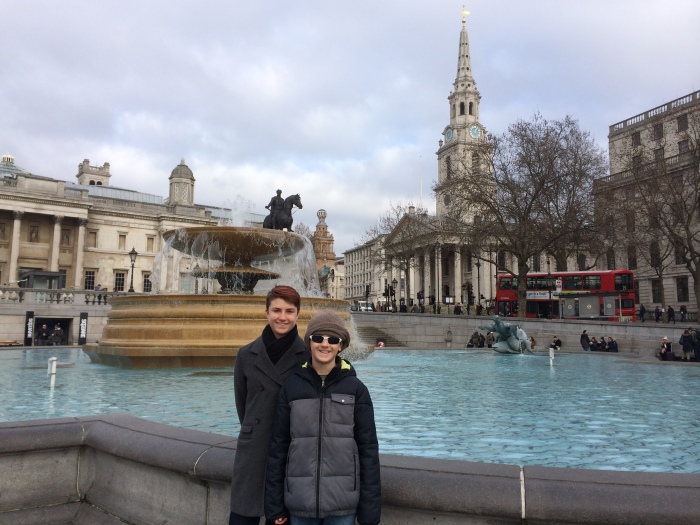 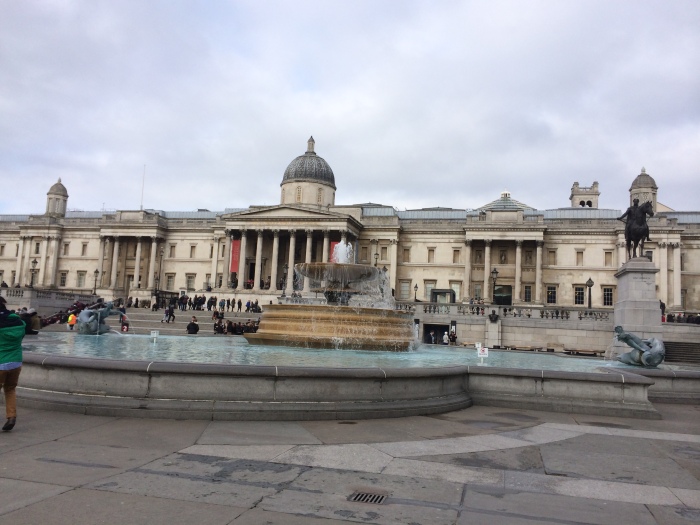 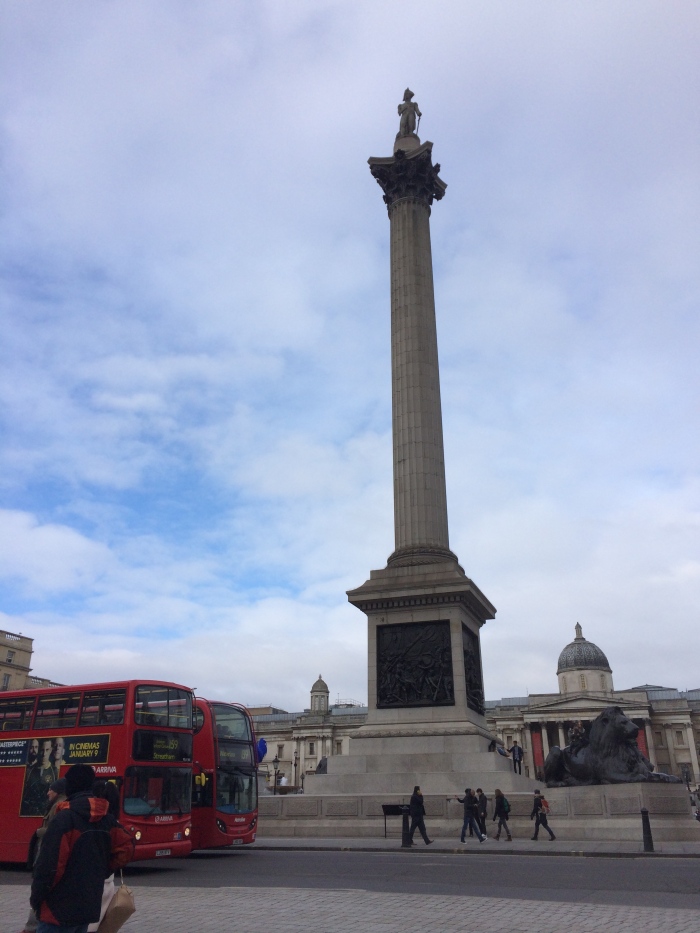 Tower of London, Tower Bridge, and London Bridge (I just want to add that in the photo of me, the coat adds 100 lbs.): 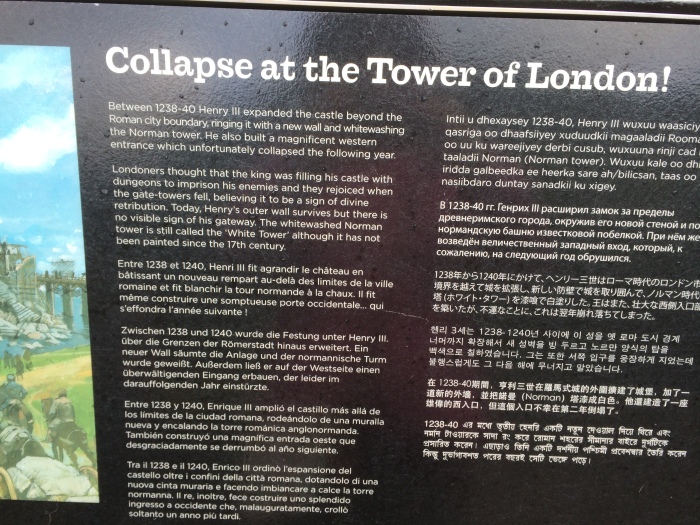 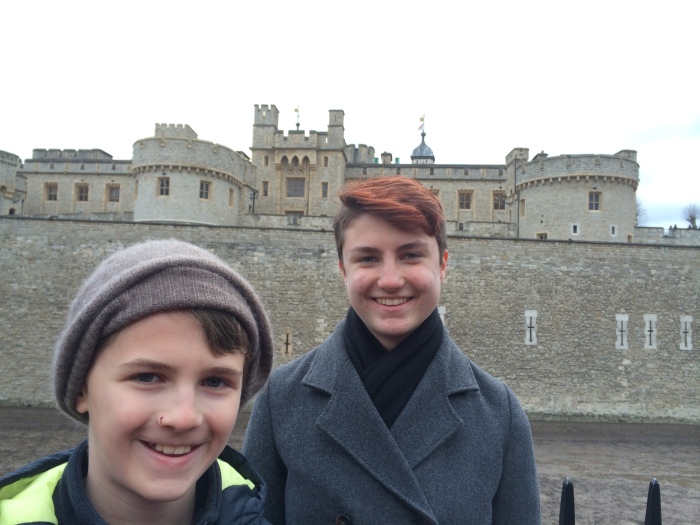 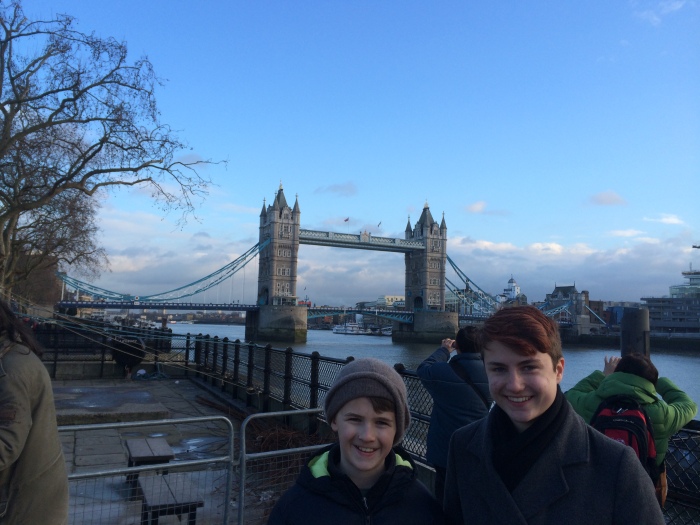 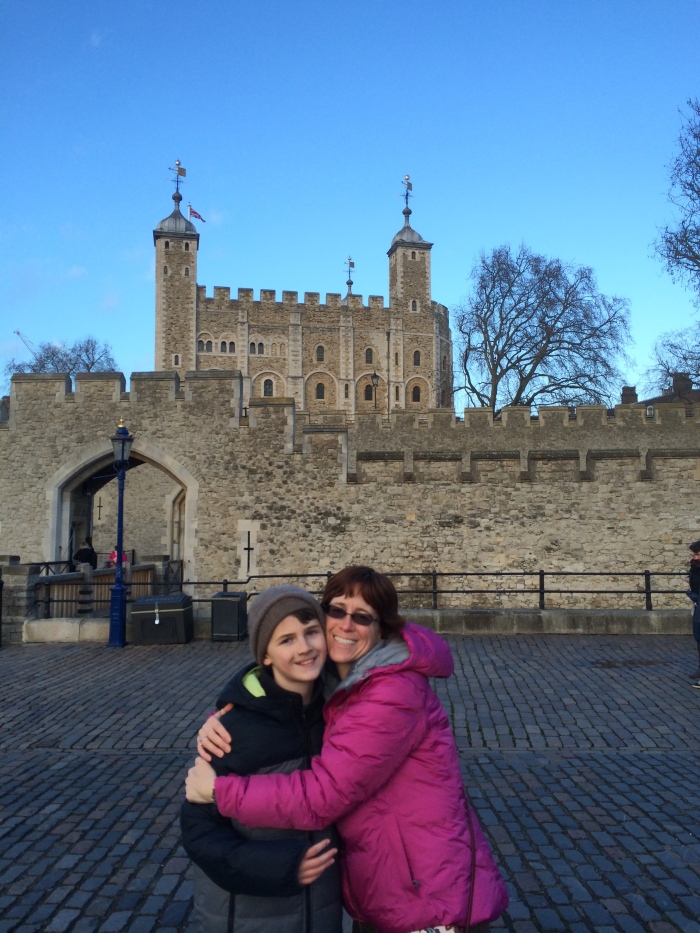 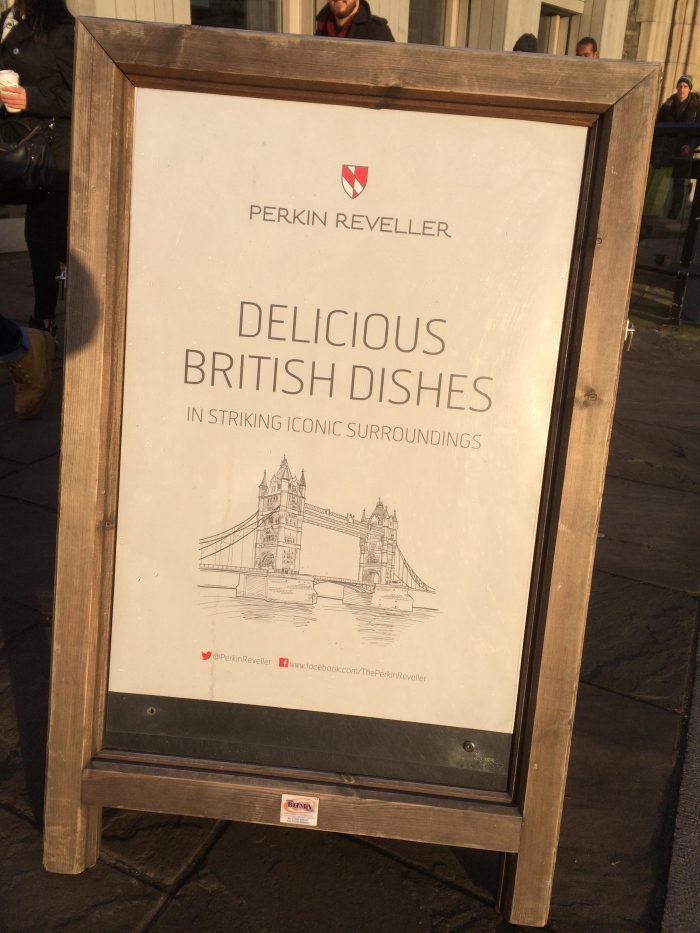 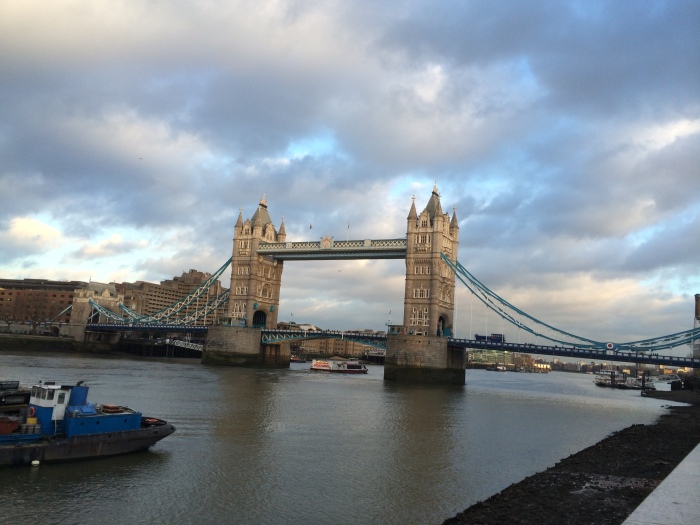 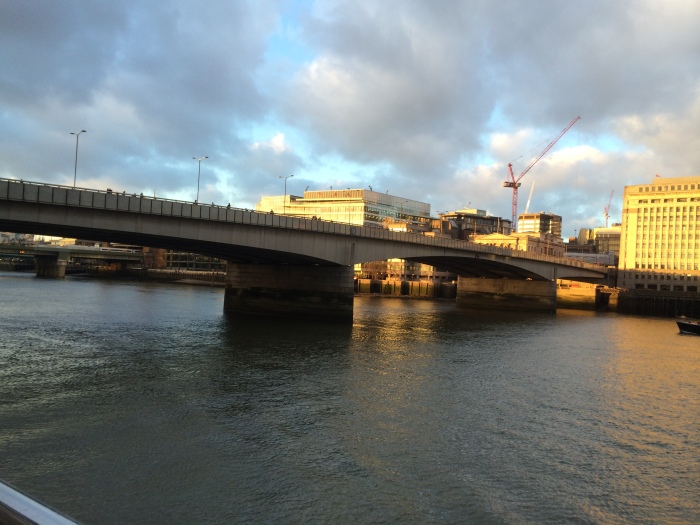 At the Victoria and Albert Museum – Laurel said the saint (Peter?) in the top left looks like he’s saying, “says here ur a little bitch.”  (It’s funnier when she says it.) 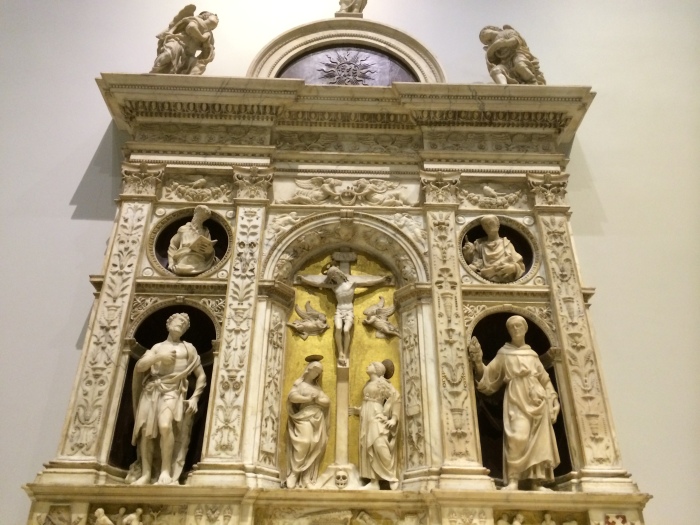 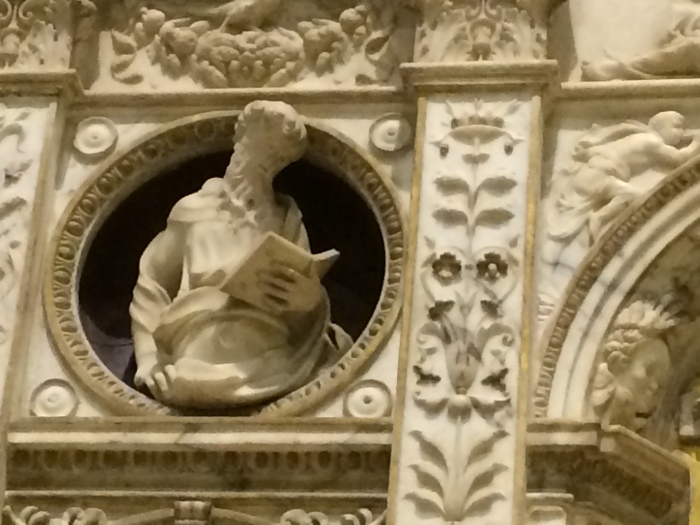