First I’m going to start with our current Airbnb situation…We arrived in Toronto late Saturday and got to our 18th-story apartment downtown. It’s nice. Catherine, the young woman who posted the place on Airbnb, said her parents own this unit; and she (Catherine) will be moving back in soon. The building management recently changed the rules on owners leasing their spaces, and now they’re not allowed to lease for less than six months. Catherine and her parents are allowed to honor their Airbnb reservations made up to the time of the ruling though which is how we’re allowed to stay here. Catherine has moved her things back into the apartment including her clothes in the bedroom, miscellaneous stuff into the den which was supposed to serve as a second bedroom according to the Airbnb advertisement but now lacks the room, and the kitchen where the refrigerator and cupboards are full of food which she told me I could eat but had to replace if I did. The dishwasher was still full of dishes which I had to unload. I asked about the air mattress she mentioned in her Airbnb post. She looked confused and said she didn’t have one. “Most people bring their own,” she said. (Laurel did test the non-fold-out sofa though and found that she fits.) So…yay. I don’t know how we could travel the world if it weren’t for the availability of short-term, furnished apartments rentals; but I’ve found two themes: 1. If I book more than a few months in advance, conditions are likely to have changed at the apartment compared to when prior tenants booked and reviewed it, i.e. In Vancouver, Seth and Genevieve used to live in a condo in Vancouver and, according to their Airbnb reviews would go out of their way to help guests who were staying in their nearby subleased apartment. Now they have a one-year-old daughter, and Genevieve had to return to work. (Canadian mothers get a one-year maternity leave at 80% pay!) So they moved to Montreal to be close to her parents. So when we needed something, we were out of luck.
2. There’s a term I’ve heard recently that has been applied to Airbnb – “The Sharing Economy.” I just now looked it up and found an extensive Wikipedia page about it which I’m pretty sure my dad would describe as “horse shit – Pardon my French.” Maybe Couchsurfing could appropriately be described as sharing since no money changes hands, but Airbnb is a very profitable business for the lessors. We’re paying $2,000 – $3,000/month for most of these places. Still, I think some of them have that mindset that they’re sharing, and any questions or requests are treated as being unappreciative of their generosity.
Allrighty, now on to Alaska.

Charlie likes to make the fist pose and insist that Laurel do the same. This is on the ship as we left Vancouver.

The pretty and newly remodeled atrium of Radiance of the Seas

Having lived in Ohio and then Colorado for most of my life, I haven’t eaten a lot of seafood. So imagine my surprise at finding this gem in my soup the first night at dinner. I forced myself to eat it and showed the picture to others on the ship the next morning thus solidifying my redneck status. 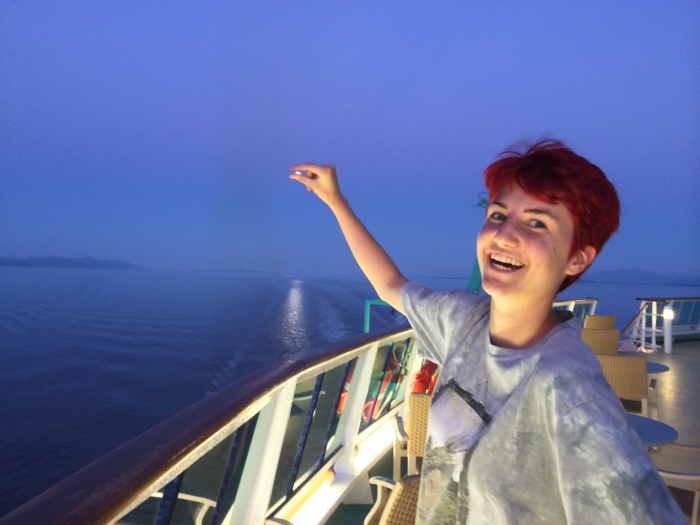 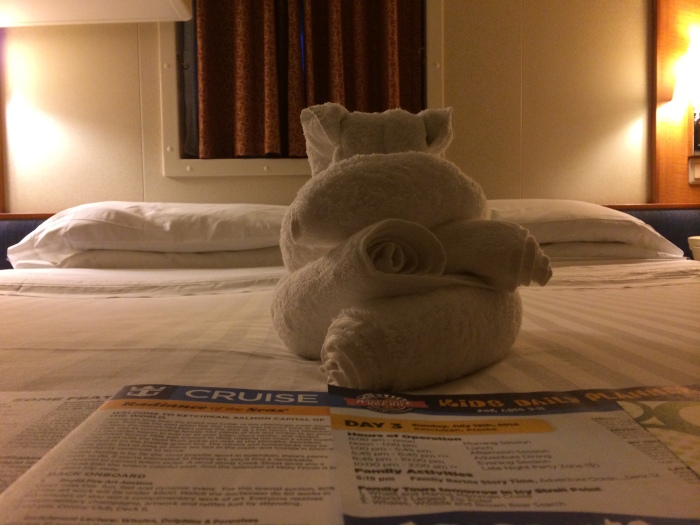 Daewa (not sure of the spelling), our stateroom attendant, found a variety of clever ways to fold our towels. 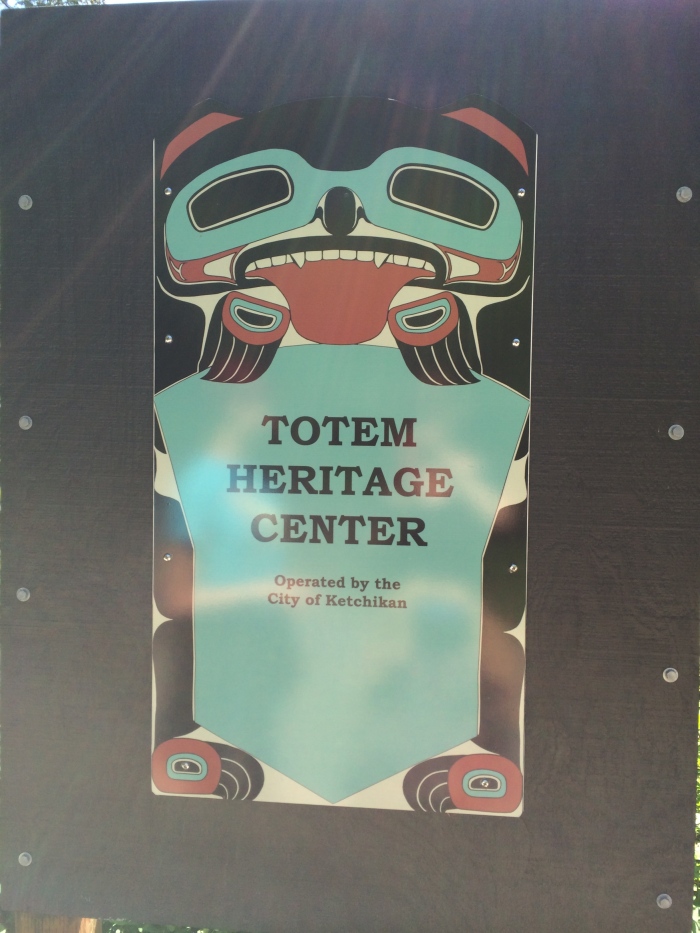 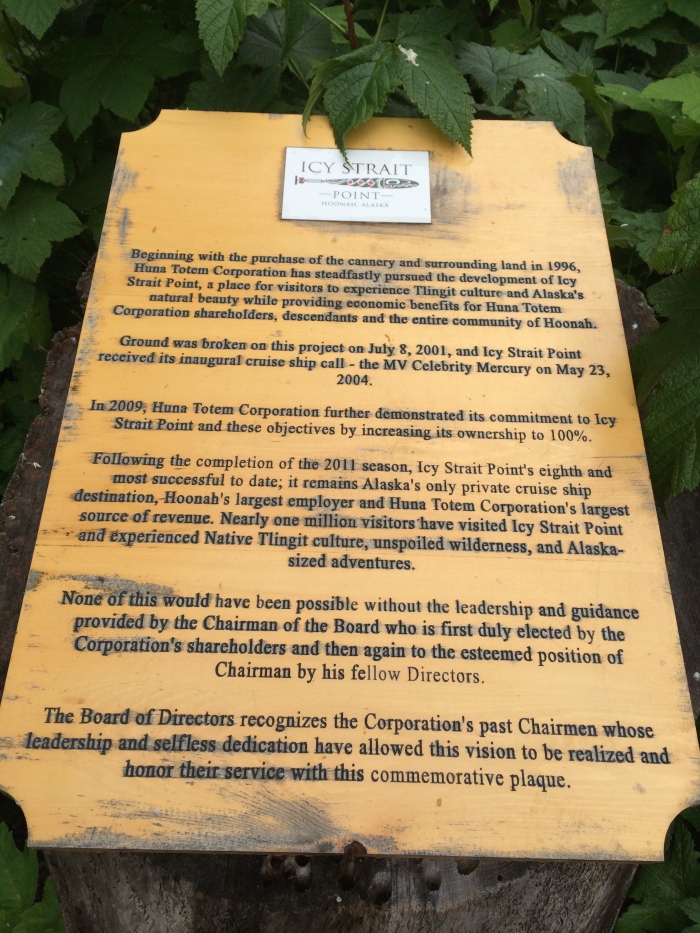 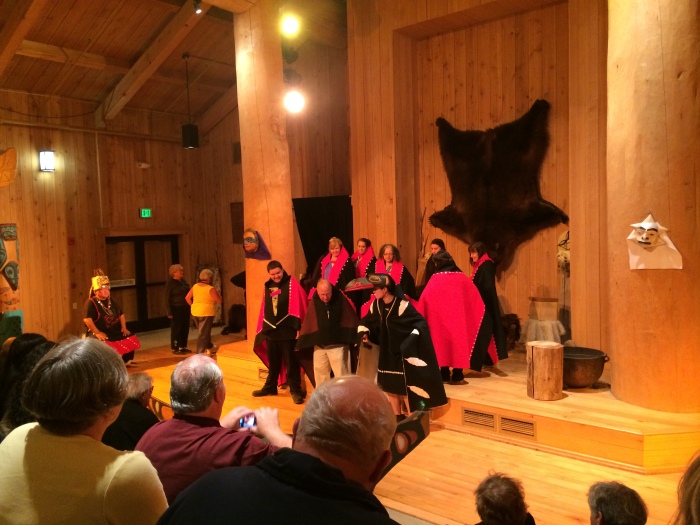 We attended a Tlinget (KLING ket) dance at Icy Strait Point in which we learned how the raven created the world. We weren’t allowed to take pictures during that dance but could afterward when they invited members of the audience to participate in a dance. 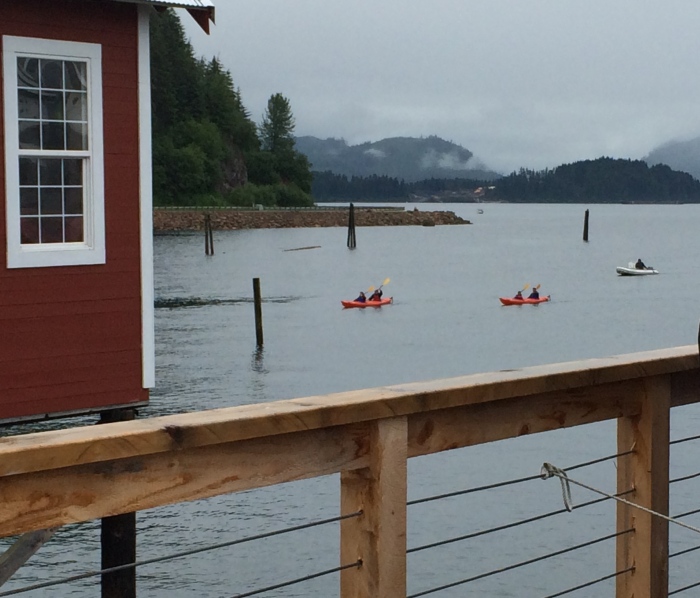 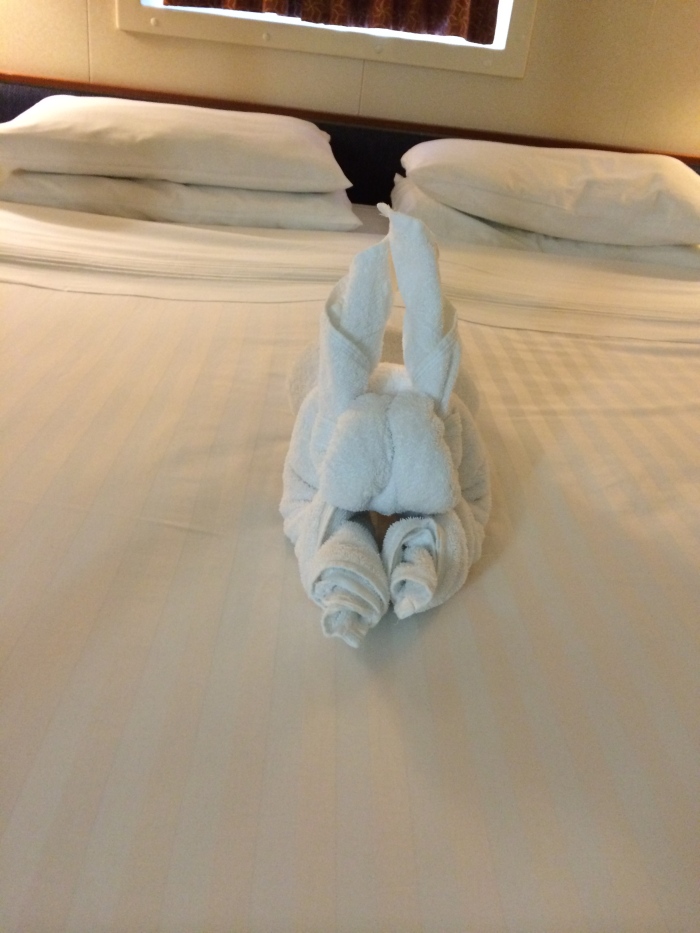 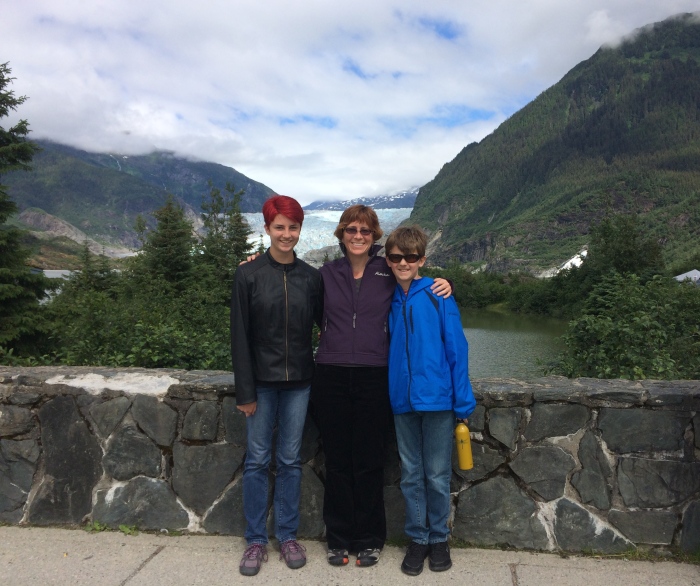 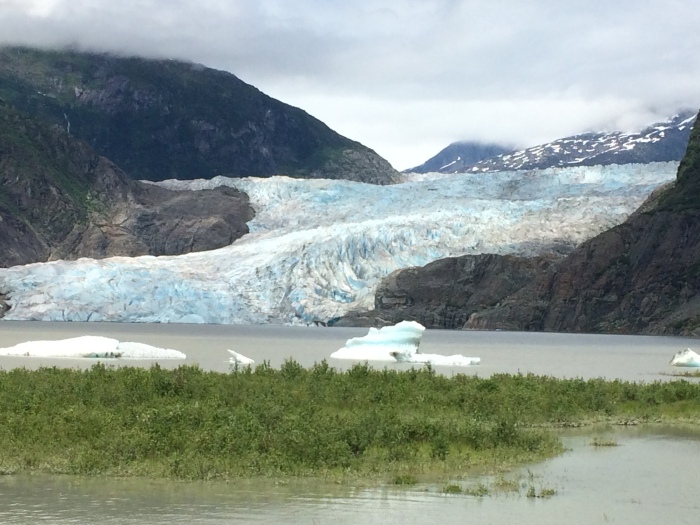 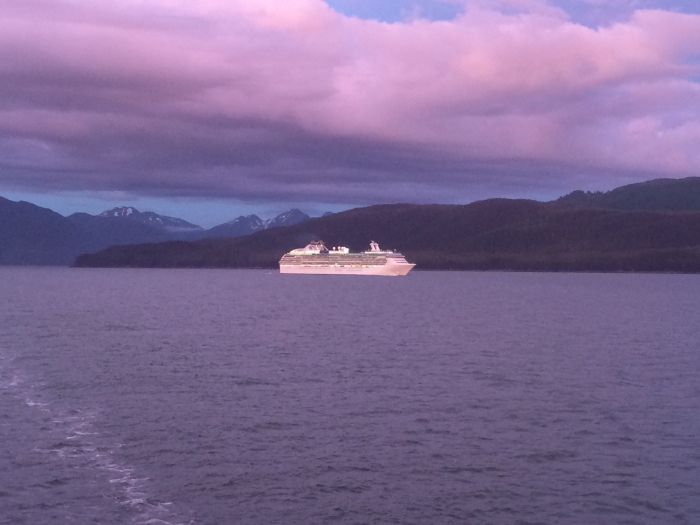 We passed and were passed by other cruise ships throughout our journey since they all have about the same itinerary.

🙂
I had some GI distress early on in the cruise and had to rush to my stateroom to use the bathroom when there was a line at another one I was going to use. Daewa was in the hallway and tried to engage me in conversation, but I told him I had to go and rushed in the stateroom. This clever towel design greeted us a few days later. 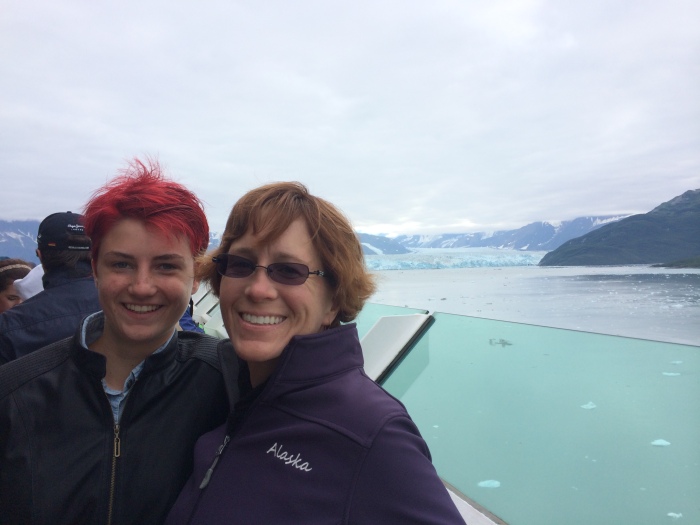 Shawn & Dennis with Charlie – We met them and their 11-year-old son Ryan our first afternoon on the cruise and enjoyed spending time with them. (Ryan was playing on another part of the ship when I took this picture.) 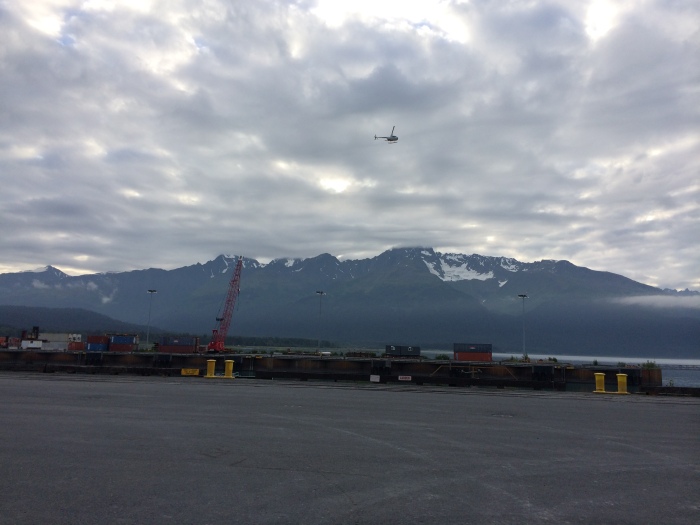 Seward – fabulous scenery but we had to get on our bus as soon as we got off the cruise so my pictures aren’t great. 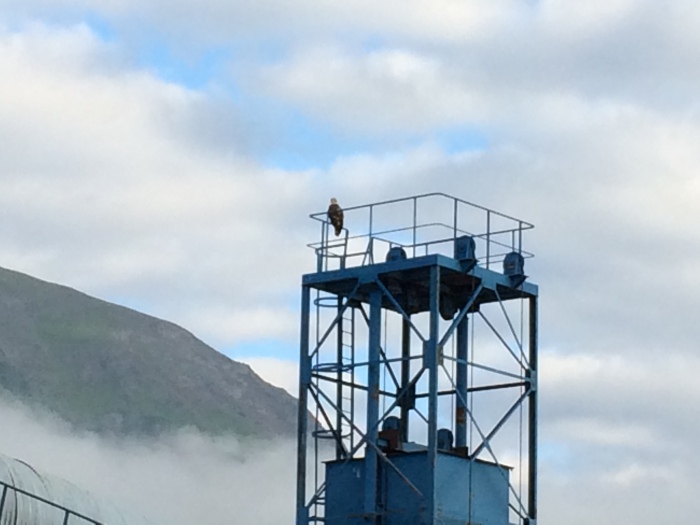 Mt. Rainier as seen from the Seattle airport