We rented a car last Thursday to drive to Colorado Springs for our dental appointments. It was REALLY cold as we waited for the Enterprise driver to pick us up to take us to Enterprise.

We were able to have lunch with friends in Castle Rock last Tuesday, lunch with friends in Colorado Springs last Thursday, and then our friends Patti & Lucia drove up to Denver on Friday to pick us up and see a local artist’s work at a store on South Broadway. The kids and I went back to this area the next day because there are so many neat stores and restaurants in this stretch.
We’re about a mile from the Denver Central Library which is huge and newish and pretty. We used to take the light rail to downtown Denver and then the free mall ride to the library when we lived in Castle Rock, so Charlie already knew he wanted to go there and take the elevator to the seventh floor. We know how to live. 🙂 Colorado residents can get a Colorado Card (library card) to check out books from the Denver Library system even if you don’t live in Denver.

Washington Park is about a mile and a half from our house and has walking paths, a big lake with ducks and geese, and a recreation center. I hope to swim laps at the rec center a few times while we’re here. 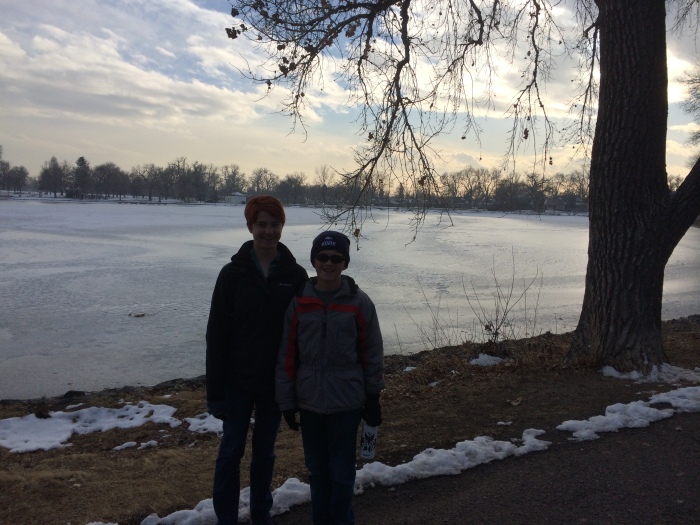 This (Tuesday) morning we walked to the Capitol to watch the Colorado Senate in session. The three legislators who spoke as we watched from the balcony discussed a bill about special-district elections. One senator invoked a Star-Trek metaphor. The second was hideously dull. The third brought up two glasses of orange juice, one fuller than the other, and talked about how even three-year-olds have a sense of fairness, i.e. they recognize when someone else is getting more oj than they are, and this is similar to the fairness with which Colorado should conduct its elections. The three senators seemed to be competing to see which one could most insult the intelligence of his listeners or put them to sleep first. No vote was taken. Someone called for the session to be adjourned until 3:00, so we listened to orange-juice boy for nothing.

As seen through the Senate balcony railing – I guess I didn’t focus the camera correctly, but this legislator is doing a crossword puzzle during debate. Very few legislators even pretended to pay attention. Most were reading reports or scrolling through something on their phones. The whole scene was quite discouraging.

Allrighty, so then we went to lunch at Chipotle (whose line was out the door by the time we left) and then to The Lego Movie at Denver Pavilions. When Jon Stewart interviewed someone from the movie on The Daily Show, I thought the idea of making a movie with Lego people was really dumb. But then I saw it had 95% approval on Rotten Tomatoes and someone compared it to Wall-E. Well, I guess I just don’t see the genius in it that nearly everyone else did because it was every bit as idiotic as I originally expected. As the credits rolled, Laurel said, “Huh. So it was a 90-minute, all-star cast, infomercial for Legos.” Yup.
Then we had ice cream (kids) and coffee (me) at Hard Rock Cafe. We liked the Denver version of this restaurant better than San Diego’s. The staff was much friendlier, and the restaurant is huge – two floors – so there’s more room for memorabilia. 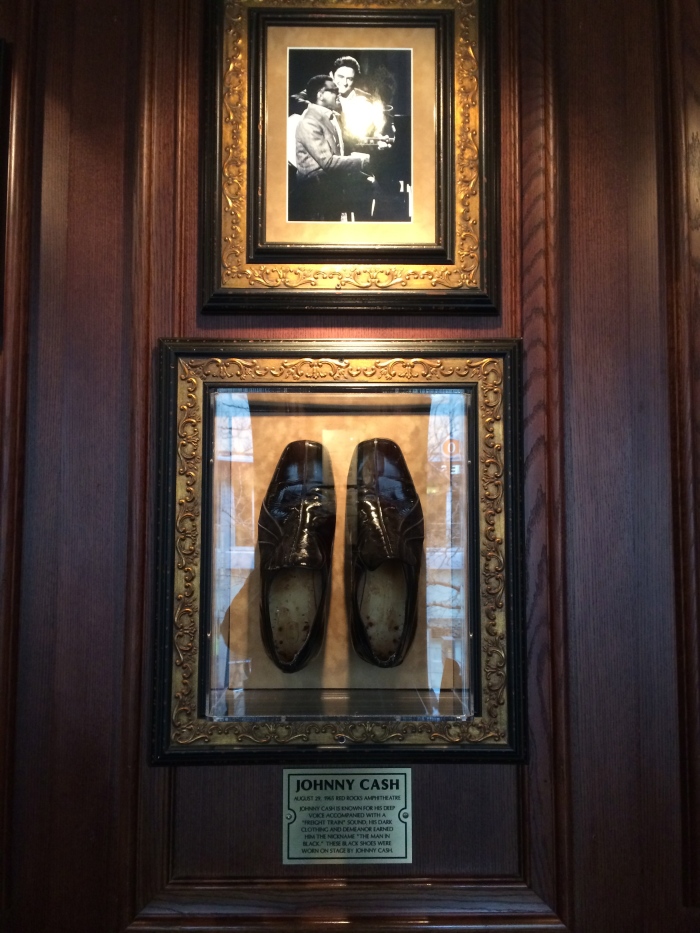 Then it was off to T-mobile to ask what will become of my cell service when we go to other countries. The short answer is, “It’s complicated.” It sounds like I may not have to change the SIM card though since T-mobile has agreements with service providers in many other countries. While we were there, we bought Laurel a phone so we can now call each other if the kids do something on their own. She’s never expressed interest in having her own phone; I think she didn’t want us to incur the expense. But she seems quite happy to have it now and has downloaded a number of cool apps.
After that we walked to the Brown Palace Hotel where Charlie had been wanting to go since we arrived in Denver. Wayne and I and the kids had walked through it years ago when Laurel and I had tea there; and Charlie wanted to see it again.

This was on a plaque in the staircase. The plaque honored past chairwomen of the debutante ball. Anyway, when I tell someone my name at a doctor’s office or somewhere official, the receptionist frequently says, “Is that Cruger with a ‘C’?” I didn’t think “Cruger” existed. I was wrong!

On an unrelated note, I’m applying for worldwide health-insurance coverage; and it’s a pain. After spending nearly two hours completing an online application, I received an e-mail from some administrator who contracts with the insurance company who said they’d just need Charlie’s and my medical records from the past three years before they could decide on whether to approve our application. Is that all? I’ve e-mailed to ask for clarification about what specifically they need, but does anyone know whether American health insurance can be used overseas for extended periods? When I asked an Anthem rep this question last fall, the guy didn’t seem to know anymore than I do. Apparently American health insurance companies that serve overseas markets are not bound by Obamacare. They want to know all about pre-existing conditions. I’m healthy, but I had to report my TMJ problems which were fixed with braces, Charlie’s autism even though he doesn’t receive treatment for it. The questionnaire asked whether any of the three of us received treatment for a variety of mental illnesses including any support groups. So I had to say “Yes” on the same line as the schizophrenia question and then explain that it was a grief support group when Wayne died. Then the administrator said I need to complete a mental health questionnaire. I asked her to clarify that the form was for me, not my son with a diagnosed mental illness. Yep, it’s for crazy me for going to a grief support group at hospice three years ago. I’m so glad I was honest on their application.