The college students returned to campus this week, so we did, too. Charlie has been wanting to go up in Sather Tower, a campanile (bell and clock tower); but it’s mostly only open when school is in session. It costs a couple dollars per person to go up to the observation deck at 200 feet; the top of the tower is 307 feet. From the deck we could see out to the Bay Bridge and the Golden Gate Bridge, downtown Oakland, downtown San Francisco, and all over Berkeley. The bells are played for ten minutes, three times per day. We knew that one of those times was noon so we planned accordingly so that we could hear them. We thought that standing right by the bells would be too loud, but most of the really large bells weren’t played – just the smaller interior bells. Berkeley students can learn how to play the keyboard that operates the bells, but the musician today was an older man. He’s inside a glass room on the observation deck and sits at a kind of piano. The keys are wooden planks that he lightly hits with his fists, and there are a number of foot pedals that he has to slide around on the bench to get to. These keys and pedals are attached to strings that ring the bells. It was really neat to listen to and watch. There were about 20 people up there with us.
And the identity of the mysterious trees has been solved. I asked the student who was taking admission at the campanile; and he told me those goofy-looking trees that I saw in Golden Gate Park and at the campus just outside Sather Tower are London Plane Trees, some type of hybrid. He said they’re very pretty in the summer despite looking like something from a Tim-Burton movie in the winter. 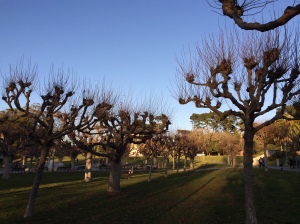 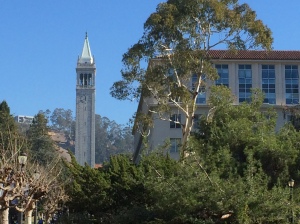 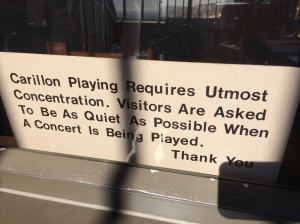 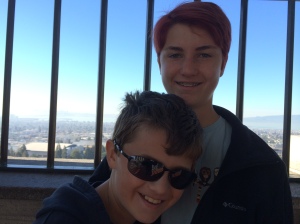 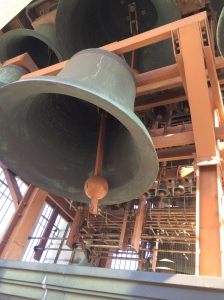 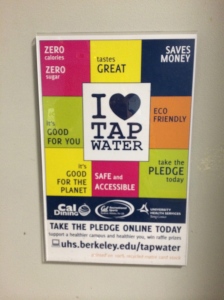