Sedona is so peaceful and beautiful, especially since we’re seeing it right after Las Vegas which could hardly be more of a contrast. We drove here Friday and have enjoyed our short time here. We’ll leave tomorrow after I sit through a 90-minute timeshare presentation which I agreed to do when the condo management people offered the kids and me a free Pink Jeep Tour in the Coconino National Forest. We did that this afternoon after hiking the Fay Canyon trail. The weather’s been perfect, and we’ve been so happy to see and walk on dirt. Other than a few steps to get on our horses in the Phoenix desert, I don’t think we’ve walked on anything but a paved surface since we left Oregon.
So here’s the Sedona story…
As we approached Flagstaff from the west, we were at an elevation of 7,000 feet and saw snow-capped Humphreys Peak in front of us. Humphreys Peak is a 12,637-foot extinct volcano, the highest point in Arizona, and the only place in Arizona with tundra. Then we drove down, down, down to Sedona, elevation 4,500 feet. Chip, our Pink Jeep driver today, said northern Arizona is at the edge of the Colorado Plateau – so it’s not a mountain range, just a high plateau. After 17 years of living in Colorado, this is probably something I should have known but didn’t. We learned on our tour that Sedona, which is surrounded by the Coconino National Forest, was settled in the 1890’s but didn’t become a popular tourist destination until a few decades ago. There’s a creek that runs through town that’s fed by springs. These springs are the drinking water for the town and the reason the town can exist in the desert. People used to have apple orchards and cattle ranches here, but now the town’s livelihood is tourism. Chip pointed out the prickly pear cactus, like we have in Colorado. He said saguaro cactus can’t grow in the Sedona area because of the cold nights, but prickly pear cactus have “anti-freeze.” Juniper and piñon pine are also native to this area. There’s an animal called a peccary or javelina that looks like a pig that is also kind of native. It wandered up from South America about 200 years ago.
We’ll hike a little more tomorrow after the presentation. Then it’s back to Phoenix. 😦 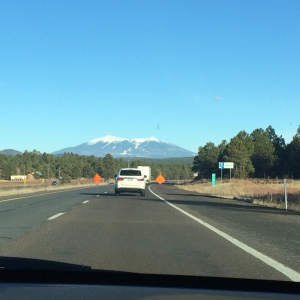 near the Fay Canyon trailhead