It was a full day! We took a cable car to the Cable Car Museum (which is also the cable car garage) where we watched the wheels and cables operate. There are four cables coming into the garage/museum for the three cable-car lines (running along four streets). An electric generator powers the twelve huge wheels around which the cable is wrapped and running. The cable then goes back out to the street where it runs underground (quite loudly) at a rate of 9.5 mph. The gripman on each cable car grabs on to the cable through an opening in the street, and the cable car gets pulled along.
The Cable Car Museum is in Chinatown, so after watching the sheaves at the garage, we walked to a large, nearby restaurant, New Asia, for lunch. I’m guessing there were 250 customers in there, 247 of them Chinese. None of the staff spoke more than a few words of English, so it was impossible to determine whether the fried foods brought around on carts (I found out online before we went that everything was dim sum – small portions of food brought around on carts, instead of ordering off a menu.) were coated in rice flour or wheat flour. But there was enough other food to choose from, so it worked out.
I was surprised that we were the only white people that I saw in Chinatown (other than at the Cable Car Museum), especially since the Chinatown Wikipedia page says that more tourists visit Chinatown every year than the Golden Gate Bridge. Chinatown is the most densely populated urban area west of Manhattan, also according to Wikipedia (and our own observations). There are three other neighborhoods in San Francisco that are smaller Chinatowns.
After lunch we walked to the edge of Chinatown to City Lights Bookstore that my friend Suzanne recommended. It’s a small (narrow, but three floors), locally-owned bookstore, and we spent quite a while in there. I bought a novel but will have to finish it here since I don’t have room in my suitcase. Most of my other books are electronic versions.
Then we walked a mile south on Columbus Avenue to Ghiradelli Square where we each ate a scoop of ice cream with chocolate sauce. Mmmm.
After that it was a short walk down the waterfront to Pier 39 to see the sea lions. There were hundreds, and they were all quite noisy and fun to watch. I read about them to Charlie this morning on the Internet before we left. Nearly all the ones at Pier 39 are male, according to pier39.com, since the females give birth to one pup every year and stay in warmer waters near Baja California to raise them.
THEN, we took the streetcar (not to be confused with the cable car) along The Embarcadero and Market Street back to our BART subway station. After a train ride and bus ride, we were back home. Tomorrow we’ll leave early for Laurel’s 8:10 am orthodontist appointment in South San Francisco (a separate city, not just a southern neighborhood) to replace a small rubber-band hook that fell off on Friday. 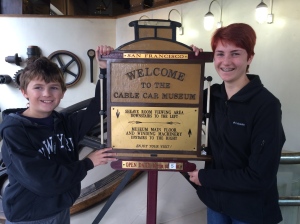 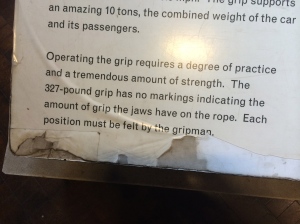 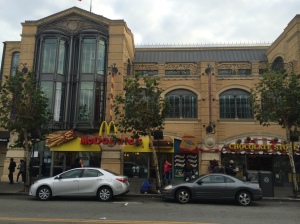 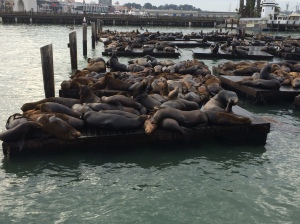 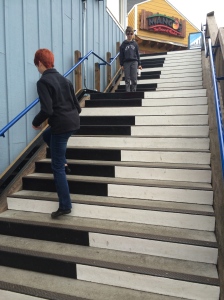 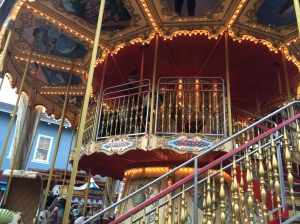